Under Cambodia’s Constitution, all Khmer citizens have equal status before the law, regardless of wealth or station.1 This promotes a political principle called the rule of law,2 an ideal that all members of a society, both the people and the State, are held equally accountable by their country’s Constitution and laws.3

On international rankings for this area, however, Cambodia rates poorly.

One way to support the rule of law is to provide legal aid, free or low-cost legal counseling or attorney services to those who would otherwise be unable to afford it. Access to an attorney advances the rule of law by ensuring disadvantaged Khmer citizens are properly informed of their legal rights. It also enables citizens to adequately pursue those rights in a court of law.6 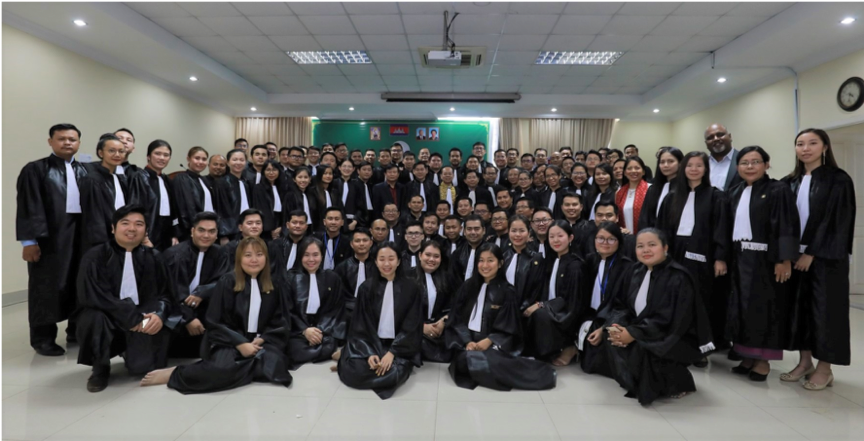 Nearly one hundred young lawyers attended at Cambodia Bridges to Justice’s training on the newest way to advance access to justice: a mobile phone application set to revolutionize legal aid in Cambodia. Photo by International Bridges to Justice (IBJ), taken on 31 July 2019. Licenses not specified.

Access to legal aid has been addressed in Cambodia’s Constitution and in the Criminal Procedure Code. Article 38 of Cambodia’s Constitution holds that all citizens shall be granted the right to an effective legal defense.7 This is expanded in the Criminal Procedure Code, where the accused may either be represented by an attorney of their choice or may request that the court appoint them an attorney.8 When the accused is a minor, or a felony charge is raised, the assistance of an attorney is compulsory.9

In practice, legal aid provided by attorneys which may be from a variety of organizations. Most lawyers provinding legal aid are mandated by the Legal Aid Department of the Bar Association of the Kingdom of Cambodia (BAKC).  While the Bar Association itself is self-financed by the contributions of its member lawyers,10 legal aid is mainly funded by the Royal Government of Cambodia, which reportedly budgeted US$500,000 for this in 2021.11 Foreign donors and international organizations also provide support.12 Non-governmental organizations (NGOs) can also be legal aid providers, funded by international donors.13 Additionally, private law firms, public interest law firms14 and the newly created governmental task force deploy attorneys to provide legal help.15

The second form of legal aid is community education and the provision of self-help resources. This form of aid is not tailored to an individual’s specific legal situation, but instead aims to boost legal literacy in general. With community education, citizens are enabled to better understand their rights and pursue legal remedies without the direct aid of an attorney.19 Community education is only offered by a limited number of NGOs such as the Community Legal Education Center (CLEC)20 or International Bridges to Justice (IBJ),21 which create these training programmes in parallel with their legal aid services.

Legal aid is still largely inaccessible to many Cambodians. This is due to both a lack of funding for legal aid services and an insufficient number of attorneys available to assist low-income clients.22 The BAKC reported that, in 2017, each legal aid case they handled would receive an estimated $44 USD of funding.23 Additionally, funding for NGOs that provide legal aid has drastically declined in recent years. This is due to general donor fatigue, caused in part by an international perception that judicial reform has been unsuccessful in Cambodia.24

Additionally, Cambodia does not have enough attorneys to serve its general population, with around 1500 attorneys (in 2019) eligible to practice law in Cambodia25 compared to a total population of approximately 15 million people.26 Further, in 2017, the BAKC reported that, of those attorneys, only 200 were assigned to provide legal aid.27 As a result, there are too few attorneys to support Cambodia’s legal aid needs.

Rural communities experience additional difficulties accessing legal aid. There are no local bar associations in the provinces and few private law firms.30 There are limited incentives for attorneys to work, and therefore provide legal assistance, outside of major metropolitan areas. As a result, roughly 90% of Cambodian attorneys work in Phnom Penh,31 despite 79% of Cambodia’s general population living in rural areas.32

Several different strategies have been suggested to reform legal aid in Cambodia. The Parliamentary Institute of Cambodia has suggested that the two best methods for improving the country’s legal aid would be to (1) increase government funding for the BAKC’s Legal Aid Department and (2) establish a local bar association in each province.33 This reform appears to be urgently needed, with the fatigue of international donors who fund legal aid NGOs. Some NGOs have had to close their doors while others have seen their staff and resources shrink.34