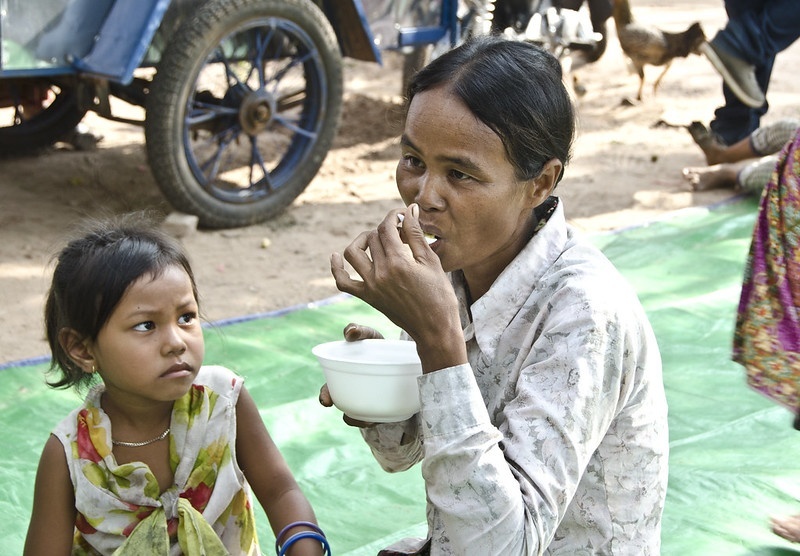 The country has achieved remarkable sustainable growth, however, poverty and food security remain the challenges. The Royal Government of Cambodia (RGC) has acknowledged that to reduce poverty is to accelerate the agricultural sector and provide safe food to all people.1 The government’s top priority in achieving its national goals is poverty reduction, as evidenced by key policies such as the Rectangular Strategy Phase IV of the RGC, National Strategic Development Plan (NSDP) 2019-2023, Public Financial Management Reform Program, 2014 National Strategy for Food Security and Nutrition, and National Social Protection Policy Framework 2016-2025, among others. Embracing the new 2030 Sustainable Development Agenda, the RGC has further reaffirmed its strong commitment to alleviate poverty and enhance food security nationwide in the Cambodia Sustainable Development Goals 2016-2030 (CSDGs). Till now, the RGC has successfully halved the proportion of people living below the national poverty line and reduced the proportion living in hunger.2

Besides the RGC’s efforts, development assistance from various partners has also contributed to Cambodia’s development with the rural area as the focal point for development partners to alleviate poverty.3 Most bilateral and multilateral partners also assist the RGC in fulfilling the gap underlying poverty in Cambodia such as gaps in economic diversification, human capital inefficiency, income inequality, infrastructure, etc.4 In 2007, the government introduced the IDPoor Program, which was backed by GIZ, the German government, and the Australian government. Any development partner wishing to execute programs among Cambodia’s poor will find the IDPoor database valuable. Furthermore, with the RGC’s social protection program, development partners such as the World Food Programme (WFP), Asian Development Bank (ADB), United Nations Children’s Fund (UNICEF), Deutsche Gesellschaft für Internationale Zusammenarbeit (GIZ), and the European Union (EU) also play an important role in funding the RGC’s social protection program (social welfare of vulnerable people, pension, emergency response, human capital development, etc.). Scholarships, Technical Vocational Education and Training (TVET), and Health Equity Funds (HEF) are also among the main pillars of Cambodia’s social protection program that they fund.5 However, eradicating poverty is a long-term process and involves nearly all sectors including the social sector, economic sector, and infrastructure sector.​ As a result, development partners have carried out their assistance in various sectors that are aimed at reducing poverty in Cambodia.6

Apart from reducing poverty by sectors, development partners are pumping up their engagement in the CSDGs as well. As of 23rd March 2022, there are 132 projects that are carried out by bilateral and multilateral development partners in efforts to achieve the CSDG Goal 1: No poverty.7

Cambodia's non-governmental groups have also contributed to the country's progress in poverty reduction which mostly is done through helping the poor families and improving their living conditions. From 2017 to 2019, there were 28 NGOs, including Foundation Children's Hospital Kantha Bopha Dr. Beat Richner, World Vision Cambodia, Save the Children International, etc., listed as the top contributors in Cambodia. About 85% of total NGO​​ operating resources were allocated to health, education, rural development, community welfare, and agriculture.8

Urban poverty refers to “the set of economic and social difficulties that are found in industrialized cities and that are the result of a combination of processes such as: the establishment of comfortable living standards, the increase of individualism, processes of social fragmentation, and the dualization of the labor market, which translates into social dualization.”9 Though the urban area is having better living standards and incomes, poverty still exists especially after the global financial crisis, the poverty rate has fluctuated in Phnom Penh, and in 2012, it exceeded any other area for the first time.10 As of March 2022, there are 41 projects both ongoing and completed in the urban planning and management sector by development partners such as the ADB, EU/EC, France, Japan, and the Republic of Korea to help the municipal tackle the urban poor challenges.11

As Cambodia is moving toward an upper-middle-income country by 2030, food security and nutrition is a critical sector that will assist in the elimination of poverty and ensure no hunger as also mentioned in the CSDG Goal 2: Zero Hunger. To successfully create an inclusive food system, Cambodia continues to open doors for multi-stakeholders and development partners for collaboration since government response is limited by resources and capacity.12

In Cambodia, about 1,726,000 households are agricultural holding according to the Cambodia Inter-Censal Agriculture Survey 2019 (CIAS), and agriculture accounts for 22% of the total GDP while employing about 3 million people in this sector in 2020. However, poor and rural people face insufficient food and nutrition. Moreover, changes in climate have also posed a threat to agriculture and affected the GDP of the country as Cambodia is ranked as one of the most vulnerable countries to extreme weather on Global Climate Risk Index.13 Hence, development assistance from partners also aid the adaptation to climate change for local farmers. As of 2021, Cambodia has received 86 projects in the food security and nutrition sector from its development partners and FAO continues to be the top donor.14

As of 23rd March 2022, there are 120 projects that are carried out by bilateral and multilateral development partners in efforts to achieve the CSDG Goal 2: Zero Hunger..15

Aforementioned, poverty reduction has been a core priority in RGC’s policies and as a result, the poverty rate has declined in the past few years. In 2007, the poverty rate was 47.8%16, 19% in 201117, and dropped to 13.5% in 2014.18 Due to the Covid-19 pandemic, poverty rate was at 17.8%.19 However, sustaining this rate has become a challenge for the RGC since poverty is becoming harder to reach.20 The RGC’s possible future action is to raise the share of incomes received by the poorest 20% and improve nutrition. This requires the incomes of the poor to rise proportionately to other groups and more intervention to support social assistance, food supplementation, public health measures, school feeding, etc.21

In 2021, RGC has also released Cambodia’s Roadmap for Food Systems for Sustainable Development 2030 which lays out four main prioritize aspects such as healthy diets for all, empowerment of youth, women, and the vulnerable, resilient livelihoods and resilient food systems, and governance for a more inclusive food system. Meanwhile, from the development partners’ side, there is an increasing number of projects that are planned for the upcoming years in both poverty reduction and food security.22

Related to Development and assistance for poverty reduction and food security