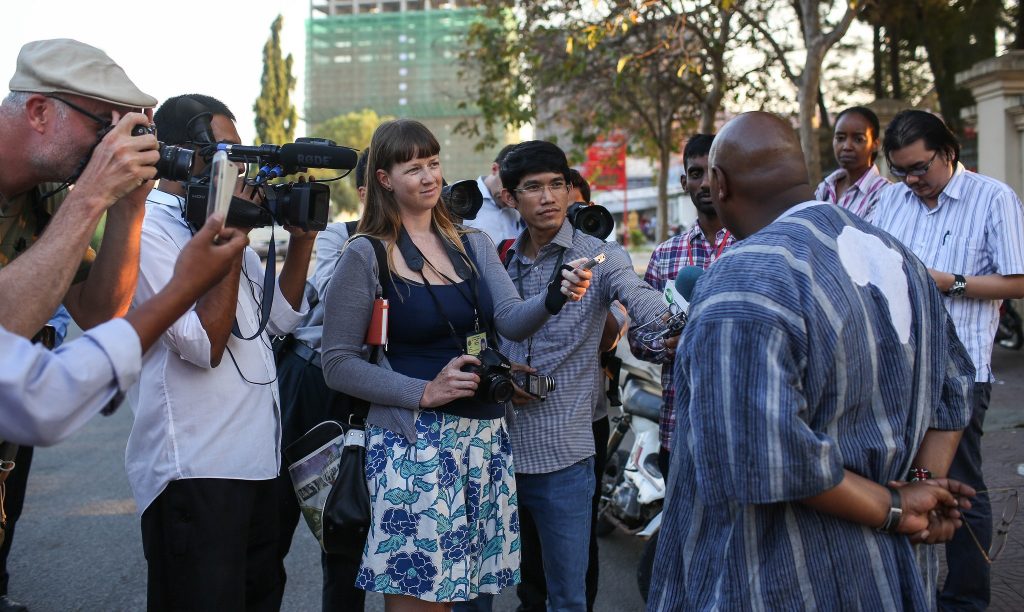 Maina Kiai speaking with journalists outside the Ministry of Foreign Affairs in Phnom Penh. Photo by Maina Kiai, taken on 6 February 2014. Licensed under CC BY 2.0

The first humanitarian international non-governmental organizations arrived in 1989. After the 1993 election, more and more internal organizations started taking root in Cambodia. It was not long after that local NGOs started to form to support the same types of needs from a local perspective. From 1992, the beginning of official reporting, to 2016, US$2,039,153,457 has been spent on official government approved projects.1 There are at present 647 active NGOs (both foreign and local) out of the 1,775 or 1,779 (depending on each source) NGOs that have worked on 1627 unique reported qualified investment projects (QIP).2

The pattern of funding for NGOs and INGOs (international non-governmental organizations) are very similar. An NGO will apply for aid from either an INGO, multilateral organization, donor nation, or corporate sponsor. This can be either through funding contracted projects that the donor country proposes or through general on-going support. That being said, any funding can be cut short or not renewed if the donor is not happy with the outcomes or methods. For example, in early July Norwegian People’s Aid cut funding 2016 for Cambodian Human Rights Action Coalition based on an assessment that they were unsatisfied with.3

As one would assume from the policy shift that the royal government set forward in phase III of the regulatory strategy as described above, the NGO sector has been empowered to do more public sector work, also to manage ODA resources and implement projects on behalf of development partners and the Royal Government of Cambodia (RGC). From 2014-2018, the Cambodian NGO and INGO sector has been allocated US$279,861,000 by multilateral and bilateral sources for QIP, with US$110,631,072.82 in 2015 alone.4 And, as stated in the development policy and administration page, Cambodia will be looking more to the Mekong region and East Asia for the majority of its aid in the future. This pivot has begun to take place, but the NGO sector is still mostly funded by western countries and western multilateral organizations.5

NGOs and INGOs work in a wide range of sectors. While NGOs and INGO are separate from their donors, in many cases, the values of the donor country can be seen in the projects or aims of the organization. NGO and INGO funding is almost perfectly bifurcated by the global region of the donors. The “transportation,” “agriculture,” “business and financial services,” “rural development,” “energy, power and electricity,” and “technology, information and communications” (which is exclusively Japanese) sectors for NGOs are entirely or overwhelming funded by Asian donors. The “gender”, “community and social welfare”, and “tourism” NGO sectors are solely funded by western countries. “Health” and “education” are fairly equally divided between the regions.6

These western funded NGOs are coming under increasing scrutiny by government regulation. The passing of the Law on Associations and NGOs (LANGO)7 has raised concerns from the international community. Among these concerns are the mandatory registration for all domestic and international associations, the autonomous prudence by the Ministry of Interior over registration, the requirement of “political neutrality” and the mandate that domestic and foreign NGOs must report all financing inflows and outflows.8 Critics of this law say that its requirement for all NGOs and associations to register with the government is in effect government censorship of action.9 This claim is strengthened by the lack of transparency in registration surrounding approval, resulting in the Government having full discretion to deny registration. Registration can be denied to “organizations whose purpose and goals are found would endanger the security, stability and public order or jeopardize national security, national unity, culture, traditions, and customs of Cambodian national society.10” If found to be not in compliance, these organizations run the risk of being disallowed registration or being shut down completely.11

According to the RCG, LANGO, which in August of 2015 was found “constitutional” by the Constitutional Council of Cambodia, was established to “safeguarding the right to freedom of establishing associations and non-governmental organizations in the Kingdom of Cambodia in order to protect their legitimate interests and to protect the public interest, as well as to promote partnership and cooperation between associations and non-governmental organizations and the public authorities.12” Additionally, this ruling is congruent with other regulatory strategies aimed at bolstering phase III of the Rectangle Strategy, which calls for the centralized management and governmental integration with the NGO sector of public work. The country’s development strategy clearly sets out this agenda and is aimed at compliance with the UN Sustainable Goals as well as promoting the country’s economy.