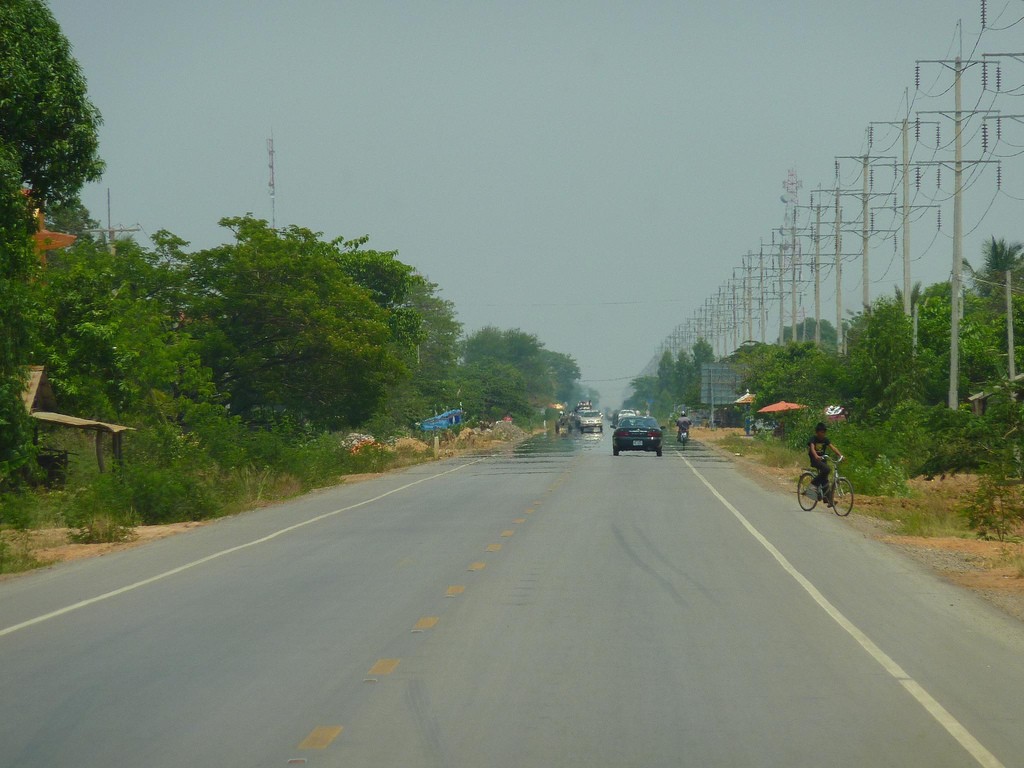 Infrastructure describes the built assets that allow a country to function, such as roads, railways, ports, airports, communication systems, electricity and drinking water distribution networks. The Ministry of Planning’s National Strategic Development Plan 2014-2018 (NSDP) outlined the country’s current infrastructure assets and strategy.1 (A draft of the NSDP 2019–2023 has been released, but as of April 2019 a final version had not been published.) The Ministry of Public Work and Transport is responsible for implementing the national policy concerning construction of all public works, including roads, bridges, ports, railways and waterways.

While decades of war and instability late in the 20th century brought considerable damage to the country’s infrastructure, the recovery in recent years has been rapid. In some cases, not having older infrastructure in place has actually been an advantage – Cambodia can leapfrog over older technologies. As Her Excellency Chea Serey, Director General of the Central Banking Directorate at the National Bank of Cambodia has said: “Unlike most developed countries, the lack of incumbent infrastructure makes it much easier for Cambodia to adopt the latest technology available without much constraint.”2

Cambodia currently has no motorways/expressways. An expressway linking Phnom Penh and Sihanoukville has been planned for many years, with one Korean-backed project announced in 2015.5 This did not eventuate. In March 2019 a Chinese-supported project was announced, to be constructed on the build-operate-transfer model, where ownership would eventually pass back to Cambodia.6 The four-lane expressway has an estimated budget of US$1.9 billion.7 The China Road and Bridge Corporation (CRBC) is the construction company behind it.8 Buying the required land for the project was still underway in March 2019.9

Speakers at a December 2017 conference on resilient infrastructure described the obstacles in the way of quality road development in the Kingdom.10 “In many instances, builders do not have up-to-date technologies, and roads are often built by untrained labourers who lack supervision.” It was reported at the conference that 70 percent of Cambodian roads have been funded by China and often use a cheap construction method involving laying down a thin layer of crushed stones topped by rubberized asphalt.

Cambodia has two main railway lines—the northern track of 386 km connecting Phnom Penh with Poipet on the Thai border via Pursat and Battambang, and the southern line of 266 km from Phnom Penh to Sihanoukville. Use of the rail system peaked in 1970,11 but then prolonged conflict and decades of neglect left it in a poor state. Rail services began again in the 1980s, but by 2008 passenger services had ended.

In 2006, a US$143 million rehabilitation project was launched by the Cambodian government with the support of a number of external funders. The southern line project was completed and opened to freight operations in August 2013.12 By early 2016 it was being used to transport fuel, coal, cement and container shipments, and passenger services began in that same year.13

However, resettlement problems,14 cost overruns, flooding and construction quality issues caused delays to the northern line work. In July 2015, the government allocated a further $33 million to complete repairs to the northern line by 2017, after project partners ADB and AusAID declined requests to provide more funding.15

In April 2019, the Cambodian and Thai railway systems were reconnected again near Poipet, after being separated in 1974. The prime ministers of both countries were present for the ceremony and crossed the border together by train.16

The government has also expressed an intention of building further new rail networks and Thailand, Japan and China have all expressed interest in working on projects to expand rail services through Cambodia.17

The length of waterways in Cambodia is about 1,750 km, of which around about 850 km are navigable in the dry season.18

Sihanoukville Autonomous Port (SAP) is the country’s only commercial and international deep seaport. SAP covers 125 hectares. Over the five years 2014–2018 the number of containers handled grew by an average of 11% annually.19 As of early 2019 the port was 11 metres deep and could accommodate 4,560 containers, but there are plans to expand these figures.20 The expansion will provide a new terminal 14.5 metres deep with 350 metres of frontage, capable of handling over 90% of the ships in the region. The project is due for completion in 2023. It will make SAP an intermediate-scale standard port with the capacity to handle more than 1.29 million TEUs (twenty-foot equivalent units) per year.21 (At the end of 2018 the figure was 537,107 TEUs.)22

It has been claimed that Cambodia’s seaport is the most expensive in Asia.24 In 2019 the government said it would reduce one of its fees to make the port more competitive.25

The state-owned Phnom Penh Autonomous Port (PPAP) in Kien Svay district of Kandal province, 30 km from the Phnom Penh Port, is the country’s second-largest. In January 2013, the port opened a $28 million container terminal financed by the Chinese government. Garment and agriculture (especially rice) are the key exports loaded at the port, while construction materials, agricultural machinery, raw materials for the garment industry, and consumer goods are key imports.26

Container traffic through PPAP reportedly grew 14.4 per cent per year on average in the five years from 2013.27

The Phnom Penh Port is the original river port in Phnom Penh city, 330 km from the sea. Ships loading here can serve international destinations such as Singapore. The small seaports at Koh Kong and Kampot are used by comparatively small vessels. River ports such as the one at Kampong Cham are used for domestic vessels only.

Cambodia currently has three international airports, at Phnom Penh, Siem Reap and Sihanoukville, although the last has significantly fewer international flights than the first two. The airports are managed by Cambodia Airports, which is owned by the French company Vinci (70%) and the Malaysian-Cambodia joint venture, Muhibbah Masteron Cambodia (30%).

In October 2017 it was reported that Chinese company Yunnan Investment Holding Ltd will build a new international airport on 700 hectares of land in Sotr Nikom district, about 50km outside Siem Reap. The agreement takes the form of a 55-year build-operate-transfer (BOT) concession.29

In February 2019 a government committee was formed to identify a location of the construction of a second airport for Phnom Penh.30 The committee is chaired by the Minister of Land Management, Urban Planning, and Construction, and includes 23 members from government ministries and institutions. The Ministry of Information estimated that the new airport will cost approximately US$1.5 billion and construction will be by Cambodia Airport Investment Co., Ltd., a joint-venture between a local conglomerate Overseas Cambodian Investment Corporation and the government’s State Secretariat of Civil Aviation.

Substantial upgrading work has taken place at all the airports in recent years. The passenger terminal at the Sihanoukville facility was extended  by 80% (to 4,800 square meters) and fully refurbished. The runway is currently (2019) being extended from 2,500 to 2,800 meters. A second stage will see it extended to 3,300 meters. The runway will need to handle the aircraft of the leaders attending the ASEAN Summit in Sihanoukville in 2022.

Cargo traffic was up by 35 percent to 65,000 tons in 2017, and aircraft movements up by 22 percent, to 90,200. The growth in passenger numbers at the Sihanoukville airport has been astonishing. International tourist arrivals for the month of June 2016 were 461; for June 2017, 4,141; and for June 2018, 14,130.33 There is a lot of competition between airlines: there are 6 airlines serving the Phnom Penh–Siem Reap route, 5 on the Siem Reap–Sihanoukville route and 6 flying Phnom Penh–Guangzhou (China).

Cambodia is served by 30 foreign airlines, 10 of which come from China.34

The State Secretariat of Civil Aviation is responsible for managing and developing Cambodia’s civil aviation.

The social media Facebook has proved especially popular, with a reported 6.8 million users in 2018 – approaching half the population, and a significant increase from the 4.8 million in 2017.38

The Ministry of Post and Telecommunication (MPT) in March 2016 signed a 25-year concession agreement with Cambodia Fiber Optic Cable Network (CFOCN) to build a landing station in Sihanoukville and lay an underwater fibre-optic cable to patch into the existing AAE-1 cable, one of the main high-speed data connections that already links China, Vietnam and Malaysia.39 The concession agreement is based on a build-own-operate-transfer model. CFOCN, a subsidiary of a Singapore-based group, already has 7,600 kilometres of fibre-optic cable in Cambodia.

Kan Channmeta, secretary of state at the Ministry, said that the government anticipated close to 80% the population using the internet by 2020.40

The Telecommunications Regulator of Cambodia was set up under a royal decree of 2015 and sub-decree of 2016. Its main objectives are “to formulate the regulations, relating to the operation and provision of telecommunications network and services, in order to promote fair, efficient, and transparent competition”.45

There were 51 radio stations in Cambodia in 2013, and a 2010 survey found that 41 percent of Cambodian households had a radio.46

According to the NSDP, there was one state-owned television station, seven provincial stations, 12 privately owned stations, and almost 100 cable television services in 2013. A 2010 survey found that 64 percent of Cambodian households had television.47

Cambodia’s capital, Phnom Penh, consumes 90% of the country’s electricity. Expansion of power distribution lines to rural areas—home to approximately 80% of the population—has been limited but is now quickly going ahead.48 In 2013, only 22.5% of Cambodian households had access to electricity,49 but by 2017 68% of homes were provided with some form of electricity.50

In 2014, the Prime Minister announced a commitment to ensure “[All] Cambodian villages would have electricity by 2020, while 70% of households would have power by 2030″.51 Large projects expanding the distribution network are underway to meet the NSDP targets of adding more than 12,800 km of transmission lines to the network by 2018.52

While there is potable water distribution in Phnom Penh and other cities, an estimated 4 million Cambodians do not have access to safe water.53 Arsenic contamination is a risk in the water supplies of an estimated 1,600 villages and in parts of Phnom Penh.54 NSDP 2014–2018 has targets for better access to improved drinking water for the rural population, from 44.2 percent in 2013 to 60 percent in 2018.

In August 2017 the Phnom Penh Water Supply Authority signed a construction deal with French company Vinci Constructions Grands Projects to update and expand the Chamkarmon Water Treatment Plant, boosting its capacity from 20,000 cubic metres per day to 52,000 cubic metres.55 Around 60 percent of the funding for the $23.5 million project will come from concessional loans from the French Agency for Development (AFD). The water authority has 330,000 customers.

In March 2019 Phnom Penh Water Supply Authority opened bidding for a US$350 million water treatment plant.56 The project is intended to produce up to 400,000 cubic metres of clean water per day to support around 50,000 households. Also in March 2019 a Japanese grant of US$30 million was announced for providing a clean water supply in Kampong Thom province57 and plans were announced for the construction of a pipeline to bring water from Thailand to Koh Kong province.58 The prime minister said that LYP group had been given permission to construct the pipeline.59

An estimated 9 million people do not have access to adequate sanitation.60 This has very serious consequences. For example, more than 1,000 children die each year from diarrhea caused by poor sanitation and unclean water. The NSDP targeted an increase in access to sanitation in the rural population from 37.5 percent in 2013 to 60 percent in 2018.

In a statement released in November 2017, the Ministry of Rural Development said that more than half of rural areas now have access to proper sanitation, up from 11 percent in 1990.61 The government was committed to eradicating the practice of open defecation by 2025.62