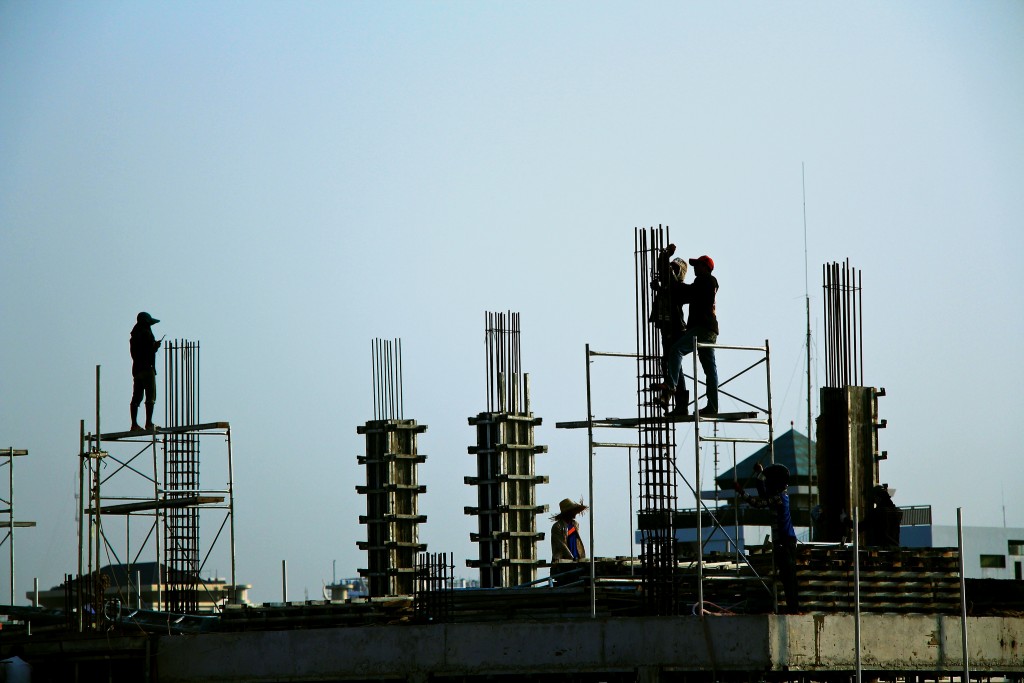 Industries in Cambodia (excluding extractive industries and mining) are mostly within the garment, light manufacturing, agricultural, construction and tourism sectors.

The Royal Government of Cambodia has set directions to transform Cambodia into a middle-income economy by 2030 and high-income country by 2050, as mandated in the National Strategic Development Plan for 2014–2018. The directions emphasize the role of industry and small and medium enterprises as a key driver of future growth.1

The government prepared and adopted an Industrial Development Policy (IDP) in March 2015 as a guide to provide systemic solutions to developing a competitive industrial sector in Cambodia.2 A key aim of the IDP is driving economic (and export) diversification beyond garment and footwear manufacturing. The target was for these dominant products to fall to 55% of total exports by 2020 and 50% by 2025.3

In July 2017 it was announced that the World Bank will provide Cambodia with US$540 million over 2018–2021 to finance economic development, with a particular focus on supporting the implementation of the Industrial Development Policy.4

The manufacturing sector accounted for 31 percent of Cambodia’s economy in 2016.5 The country’s growth rate for value added in industry is the highest in Southeast Asia.6 The Asian Development Bank has forecast the country’s manufacturing to continue to grow by around 9.6%, “with a slowdown in garments and footwear off set by stronger growth in emerging industries: electrical parts, automobile components, bicycles, milled rice, and rubber.”7 In 2017, Cambodia became the European Union’s number one supplier of bicycles.8

There were 1,528 factories in Cambodia at the end of 2018 according to figures from the Ministry of Industry and Handicraft, with 922 – almost two-thirds – operated by weaving, bag, garment, and footwear manufacturers.10 2018 saw 178 new factories opening, compared to 150 in 2017. Total income from production of both domestic and export products was about US$13.17 billion in 2018 – an increase of 23 percent on 2017.

Currently, the unit labor cost for manufacturing a cotton shirt in Cambodia is estimated at $0.33, compared to $7 in the United States.16 This advantage may be lost with the further development of robotics in the garment industry – the ADB quotes observers saying that robots could drop the US production cost to around $0.40.17

Better Factories Cambodia (BFC – a partnership between the International Labour Organization and the International Finance Corporation, a member of the World Bank Group) was established in Cambodia in 2001, largely to improve working conditions and competitiveness. A memorandum of understanding between BFC, the government and the Garment Manufacturers’ Association has been renewed five times since then, the current agreement running to 20 December 2019.18

After garments and footwear, bicycles are third largest export category, at US$355 million in 2017.19 Electrical and vehicle parts exports together reached US$430 million in 2017,20 but these are often assembled or subject to further processing overseas.

The agriculture sector accounted for about 26 percent of Cambodia’s economy in 2016.21 Agricultural output grew by about 1.7 percent in 2017.22 As part of the government’s policy to support the agriculture industry, materials and equipment used in agricultural production are exempt from import duties. The government hoped these policies would increase milled rice exports to one million tonnes by 2015, but that goal was not met.23 Rice milling is an emerging industry.

Cambodia is experiencing a property boom. According to a World Bank report, construction overtook agriculture and tourism as the second largest growth driver in 2014. This has been reflected by the $2.5 billion in construction permits approved by the Ministry of Land, Construction and Urbanization and the $258 million fixed assets investment in tourism sector approved by the Council for Cambodian Development.24 However, the lack of construction regulations remains a concern.25

Tourism is a significant and growing part of the Cambodian economy. In its October 2017 regional update, the World Bank said that tourism contributed 28.3 percent of Cambodia’s GDP and 25.9 percent of employment.26 Domestic tourist numbers were estimated at 10 million in 2016.27 This shows a doubling over 10 years according to statistics from the Ministry of Tourism. The growth rate is estimated at 5–7 percent a year.28 The Tourism Ministry announced in early 2017 that it had prepared a master plan for the development of the industry to attract investment in the sector and create more products for tourists.29

Cambodia has targeted 7 million foreign tourists by 2020, but will need at least 10 percent annual growth numbers to achieve that.30 That is currently being achieved – total tourist arrivals for 2017 were 5.6 million, 11.8% growth over the previous year.31

The countries that provide most of the tourists to Cambodia have changed over the last decade. While western countries were the top markets for foreign tourism in the early 2000s, they have been overtaken by tourists from China, Vietnam and other Asian countries. Over 1.2 million Chinese visitors arrived in 2017, an increase of 46% from the previous year.32 Three-quarters of international tourists today come from the Asia/Pacific region, with only 15 percent from Europe.33

The growth of Chinese tourism and investment is having a significant impact on Sihanoukville and the wider coastline of Cambodia. It was reported that just in the first week of November 2018, the Council for the Development of Cambodia approved five, 5-star hotel projects with a total of 3,000 rooms.34

For all tourists from overseas, a key drawcard is the Angkor Wat temple and surrounding area, protected as a UNESCO World Heritage Site. In July 2017 the seventh-century temple ruins at Sambor Prei Kuk in Kampong Thom province also became a World Heritage Site.