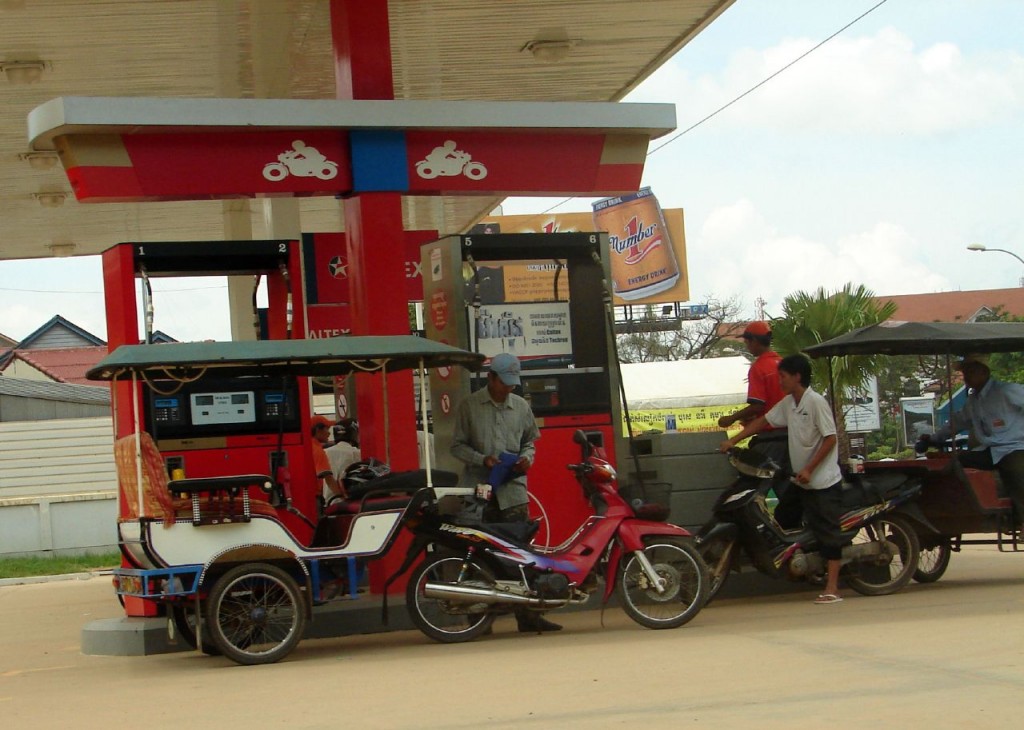 A tuk-tuk refilling with gasoline. Photo by The Shifted Librarian, taken on 13 October 2008. Licensed under CC BY-NC-SA 2.0.

The prices of gasoline and diesel are higher than in neighboring countries. From 2010 to 2014, according to the World Bank, the average pump price for diesel in Cambodia was US$1.24 per liter while the average prices in Thailand, Vietnam and Laos were US$0.90, US$0.91, and US$1.08, respectively.1

In early 2015, the Phnom Penh Post reported that the Royal Government of Cambodia was considering legislation to control consumer fuel prices in an effort to manage market fluctuations.2

The Cambodian Commerce Ministry has set a policy to meet petroleum distributors every 10 days to further review the current price of petroleum to ensure that the global oil price is reflected in the price at the pumps in Cambodia, and to discuss challenges that the distributors are facing.3

Cambodia’s most significant offshore oil reserves are in Block A which is believed to prospectively yield as much as 10,000 barrels per day.5

The Ministry of Mines and Energy is in the early stages of developing a national oil company, the Cambodia Daily reported on March 2015. If established, the state-owned petroleum company would play the role of a body that invests money in the oil and gas industry.6

A petroleum law is currently being drafted. If the government decides to establish its own oil company, its role and responsibility must be specified in the new law.7

The Australian energy company Star 8 is introducing a range of solar transport vehicles to Cambodia, including solar tuk-tuks and solar buses.8 The company began operations at its first solar factory in Phnom Penh in February 2014 and plans to develop a second solar factory at the Sou Ching Port in Siem Reap province.9

In 2014, the joint venture between Sou Ching Group and Star8 announced that it planned to operate 50 solar-powered buses in Siem Reap province. The buses are fitted with solar panels on their roof tops to help charge their batteries; no petrol is required. A fully charged battery runs for six to eight hours, and can power the vehicle for 90 kilometers. The Phnom Penh Post reported the new buses cost $23,000 each.10

Related to energy for transport