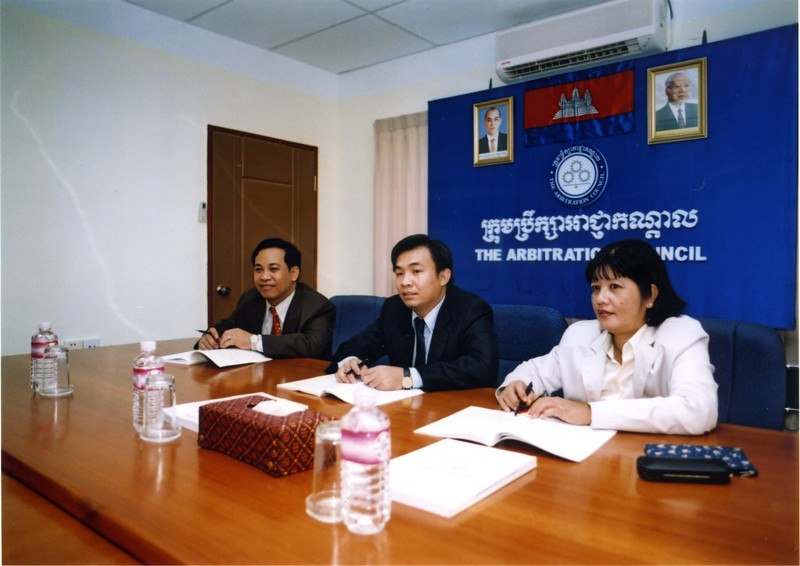 Arbitration Council in session, Cambodia. Photo by ILO (Asia and the Pacific), took on 8 June 2012. Licensed under Attribution-NonCommercial-NoDerivs 2.0 Generic

The Council’s work is supported by the Arbitration Council Foundation. Composed of departments of Finance and Administration, Legal Services and Training, Monitoring & Evaluation and Communication, the Foundation is mandated to provide technical and management support to the Council. The Arbitration Council is funded partly by the government through the Ministry of Labour and Vocational Training, and also through the ILO and other international agencies.1 Since the amendment of the Trade Union Law, the number of case held by the Arbitration Council has decreased, which led to a decrease in international donations.2

Between its launch in May 2003 until December 2018, the Arbitration Council received 2,765 cases.5 From 2011 to 2016 the average time taken to resolve a case was 17.6 days.6 The resolution through arbitral award after the hearing requires sufficient time for comprehensive research, law analysis, and award writing. Therefore, settling disputes by arbitral award averagely took 22 days in 2018 while it was 17 days in 2017.7

The Council claimed a 78 percent success rate in 2016,9 where the council:

Graph: Reported complaints by the Arbitration Council10 and reported strikes by GMAC11

Reinstatement has been the most common issue taken to the Council: it accounted for 44 percent of cases in 201612 and over two-thirds of the cases in the first half of 2017.13 But the food/meal allowance has become the top dispute case registered at the Council in 2018. In a similar way, reinstatement and termination compensation disputes still remain as the outstanding issues.14 However, other issues of safety and health at work such as poor working environments (air and light problems), fainting and fire are often reported by news media, NGOs and international organizations.15

The number of labor dispute cases received by the Council have been changed at a noticeable rate during the period of 2016 to 2018. The Council received just 50 cases in 2017 compared to 248 in 2016.18 However, the trend raised up to 59 cases with a sharp rise to 13 disputes cases in December 2018.19 The Arbitration Council Foundation noted that the decline follows the adoption in 2016 of the Law on Trade Unions. Under this law, collective disputes can only be referred to the Council by unions holding ‘most representative status’, or unions or workers who are recognized by the Ministry of Labour and Vocational Training or a provincial Labour Department.