Since 1993, the Royal Government of Cambodia (RGC) has been working to reform the country’s legal framework, and in particular the application of justice, to provide a clear and fixed procedural system to ensure respect for individual rights and equality before the courts.1 In theory, to be settled by a judge, both civil and commercial disputes must be presented to the court according to rules defined by law.

A civil litigation is a judicial procedure before a civil court that allows a person to settle a dispute or claim their rights against another person or a company regarding every matter except criminal.2 For instance, a civil dispute may concern:

In a civil case, the plaintiff is the one who seeks the court’s endorsement of a right they want to exercise against the defendant, who opposes it.

Civil rights and obligations are mainly provided for by proceedings in the Code of Civil Procedure, which was promulgated on 6 July 2006. 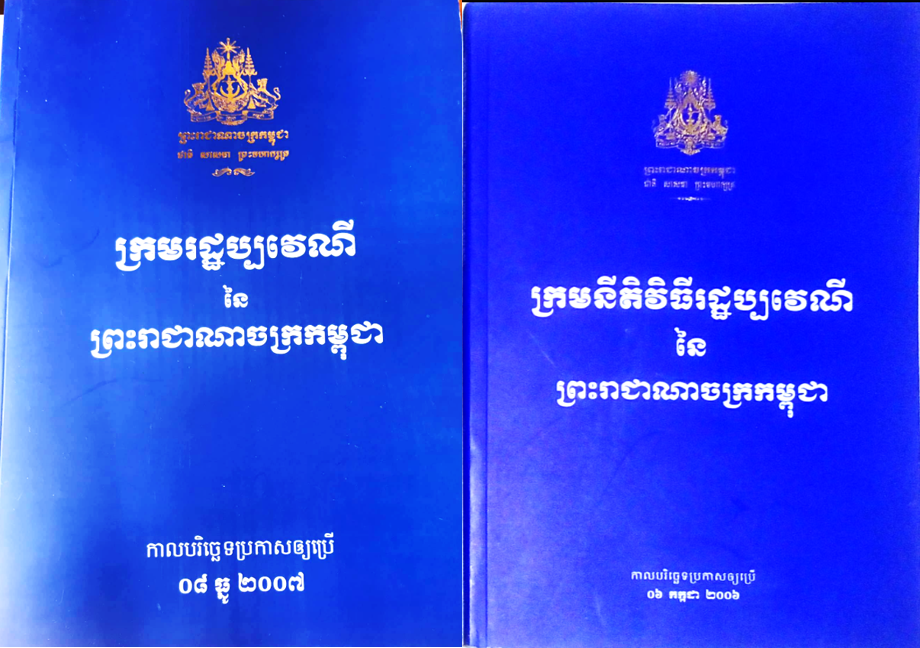 This code specifies all procedures related to civil actions. The code is divided into 9 books with 588 articles in total.

The nine books are:

Litigation proceeding is a civil lawsuit or civil action aiming to determine the existence or nonexistence of rights and obligations or legal relationships founded on the laws.3 That procedure is the common proceeding at the courts of the first instance, namely the Phnom Penh Capital Court and other provincial or municipal courts. This procedure begins with filing of a lawsuit and ends with final judgment. First, the plaintiff files a lawsuit,4 then both parties prepare for oral argument and finally oral arguments are heard in court before the judgement. Compulsory execution procedures aims at achieving a final decision on claim rights of a private individual.5 While procedures of preservative relief, as mentioned in Article 530 of the Code of Civil Procedures “If there is an apprehension that execution will become impossible or extremely difficult by reason of alteration of the state of the property of the debtor in execution, or that significant damage or imminent risk will arise affecting the status of one of the parties in respect of the right in issue, a person wishing to preserve his/her rights may apply for preservative relief pursuant to the provisions of this Book”.6 During all the procedure, the judge must encourage the parties to seek a compromise, to opt for an alternative dispute resolution.7

A party dissatisfied with the judgement can file an appeal to the higher courts (Appeal Court and Supreme Court). It starts a procedure for the trial and ruling on appeal of the parties to dismiss or change the previous judgement rendered by a lower court before the decision becomes definitive.

The Code of Civil Procedure provides three types of appeals:

Since the 1995 Law on Commercial Rules and Register was implemented, commercial courts have been due for introduction.12 However, these courts have not yet been established (as of early 2021). This law states during the period in which the Kingdom of Cambodia has no Commercial Court, ordinary courts are competent in all commercial matters. Thus, the Civil Court of the court of the first instance adjudicates all commercial cases.

The courts of first instance have the competence to hear all commercial cases including insolvency cases in accordance with the provisions in commercial procedures.13 The Phnom Penh Municipal Court is the court most frequently used by commercial litigants. However, this court is seen by practitioners as overburdened and lacking expert and experienced judicial professionals in adjudicating commercial matters.14

Commercial proceedings follow the same set of rules as civil proceedings, except in the composition of the judging panel of the court: there are three judges and two advisors, who are businessmen or who have knowledge in commercial laws, where the subject matter is equal to or over 1.000.000.000 (one billion) riels. When the amount at stake is between 100.000.000 (one hundred million) and 1.000.000.000 (one billion) riels, the panel consists of only one judge and two advisors.15

In the current situation, the average cost of resolving a dispute is estimated at 103.4% of the value of the claim.17 Most companies therefore have greater confidence in alternative dispute resolution methods, such as mediation and especially arbitration, which developed with the 2006 Law on Commercial Arbitration and the launch of the National Commercial Arbitration Centre (NCAC) in 2013.18

Related to Civil and commercial litigation