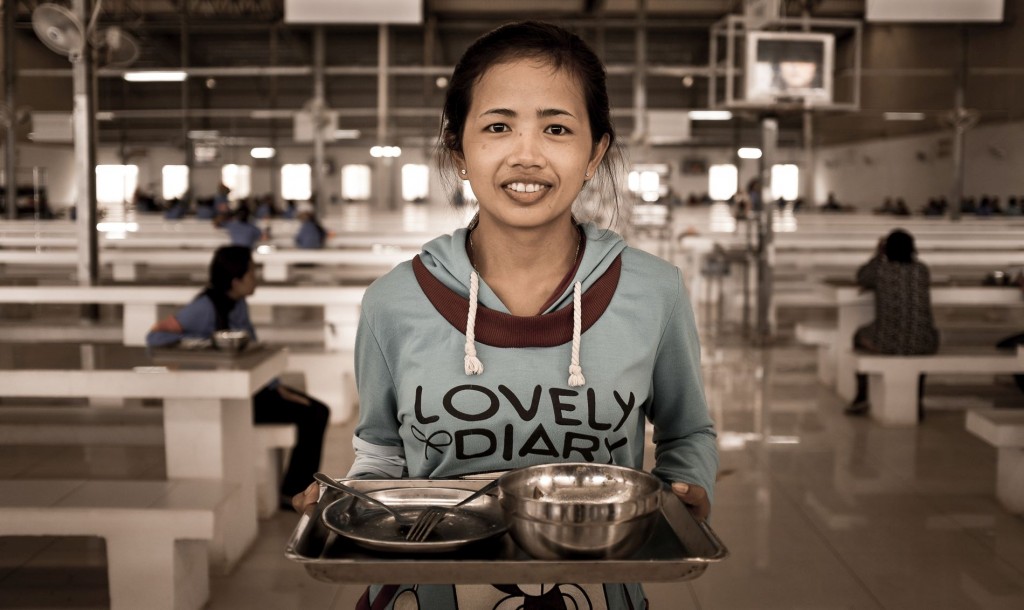 A female garment worker receiving food from her factory, Cambodia. Photo by ILO (Asia-Pacific), uploaded on 14 July 2015. Licensed under CC BY 3.0 IGO.

Cambodia’s garment and footwear exports have grown at a solid pace in recent years, with a compound annual growth rate of 10.8 per cent per annul over the 2014-2016 period.1 It grew rapidly to become a powerhouse for the Cambodian economy, producing US$7.97 billion of exports in 2019.2 Cambodia is one of the top ten exporters of clothing in the world today.3

With the help of trade privileges given by the United States and European Union, the industry has blossomed. It accounted for 74 percent of Cambodia’s total merchandise exports in 2018.4  In 2018, it contributed 11.3 percentage points of the country’s seven per cent GDP growth.5

In 2019, a report from General Department of Customs and Excise of the Ministry of Economy and Finance said, Cambodia exported more than $7.97 billion worth of garment, textile and footwear (GTF) products in the first nine months of the year, up 13.18 per cent year-on-year from $7.044 billion. The US accounted for $2.5 billion of the exports and the EU $2.4 billion – with $670 million going to the UK, Japan $711 million, Asean member states $121 million and other countries $1.5 billion. 6

Cambodia’s exporting factories mainly operate to the cut-make-pack (CMP) model. They produce relatively low value-added garments, with the design and production decisions made in other countries. In most cases raw materials are imported, from mainland China, Hong Kong, Taiwan, Japan, Vietnam and Korea.7

The garment and footwear sector continues to be a major employer for Cambodia’s labour force. In the first half of 2017, the sector provided on average 635,000 jobs per month in registered exporting factories, adding approximately four per cent increase over the same period in the previous year. More recent figures are estimates, but industry sources have quoted numbers as high as 754,000 workers.8

The sector’s total wage bill reached an average of US$126 million per month over the first half of 2017, as compared to the monthly average of US$116 million over the same period in 2016.10

Wages for garment workers were flat in the early 2000s, and for the first decade actually fell in real terms. Since 2010, however, wages have increased in both nominal and real terms.11 The minimum wage for the garment and textile industry, which is set each year, was US$80 per month in 2013; the figure for 2018 has been set at $182.12

Cambodia’s National Social Security Fund registers all garment and footwear factories with eight employees or more, including subcontractors, regardless of whether they export or not. For 2016, it had 800 factories registered.13 By contrast, the Ministry of Commerce, the Garments Manufacturers Association of Cambodia and Better Factories Cambodia each recorded fewer than 600 factories.14 The difference is most likely made up of non-exporting and subcontracting companies.

Since 2001, the International Labor Organisation’s Better Factories Cambodia (BFC) program has carried out monitoring, training and reporting around working conditions in Cambodian factories.15 The program helps manufacturers to understand and comply with national and international labor standards and helps workers to be aware of their rights. A garment factory must agree to BFC monitoring before the government grants it an export license.

In November 2016, the Better Factories Cambodia program was extended to December 2019, with the support of the government (through the Ministry of Commerce and the Ministry of Labour) and the Garment Manufacturers Association.

In 2017, analysis of statistics shows a growing number of subcontracting companies.16 These provide jobs and contribute to growth, but they can potentially be used as a way to undercut regulations and the minimum wage because subcontractors are not monitored by BFC and get less scrutiny from government bodies.

Reports of people fainting or collapsing are reasonably common. Journalists from British Newspaper The Observer, together with representatives from the Danish investigative media group Danwatch, interviewed workers, unions, doctors, charities and government officials in Cambodia. For one instance, they found “The women who collapsed worked 10 hour days, six days a week and reported feeling exhausted and hungry. Excessive heat was also an issue in three factories, with temperatures of 37C. According to unions, short-term contracts were also a key source of stress and exhaustion.”17

Cheav Bunrith, director at the National Social Security Fund, told the newspaper that the number of fainting has decreased, from 1,800 in 2015 to 1,160 in 2016, thanks to education programs on nutrition and free treatment for those feeling unwell.

Major global clothing brands typically have their own codes of conduct that they require factories to adhere to. These may include limits on hours worked, maximum temperatures and a ban on short-term contracts.

The garment and footwear industry is facing a number of challenges, including:

There are positive moves too:

While the garment and footwear industry has grown enormously in the last 20 years, the textile industry – just producing fabric – has remained tiny. Textile production on a commercial scale requires a substantial investment in heavy machinery that requires a lot of energy to operate – energy that is relatively expensive in Cambodia. Two mills in Cambodia, one in Bavet and one in Kampong Chnnang, produce knitted fabrics.22