The United States of America (the US) is one of the biggest donors to Cambodia.1 2 The history of cooperation and relations between the two countries can be traced back to the early 1950s after Cambodia received full independence from France. In 1955, the first US assistance program to Cambodia covered education and infrastructure development.3 National Road 4, a 225-kilometre highway connecting the capital city Phnom Penh to Sihanoukville, is one example of the benefits of US aid to Cambodia during that time. 4  The project cost $25 million and was,​ at that time, the largest project between the two countries.5 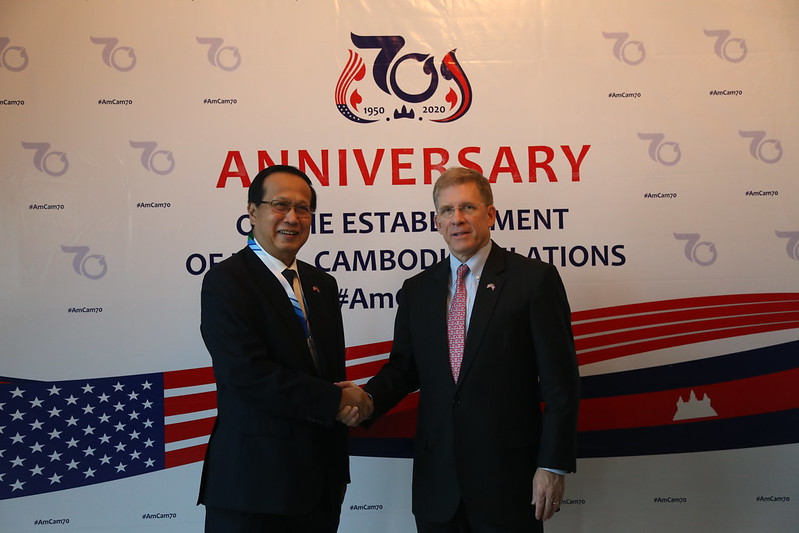 Photo of H.E. Pan Sorasak, Minister of Commerce and US Ambassador W. Patrick Murphy at the 70th Anniversary of the Establishment of US-Cambodia Relations 2020. Photo by the U.S. Embassy Phnom Penh, taken on 07 February 2020. Licensed under CC BY-ND 2.0.

During the period of Sangkum Reastr Niyum (1955–1970), the US continued its support in various development sectors until the country fell into the regime of Khmer Rouge. After the signing of the Paris Peace Agreement in 1991 which​ restored peace and political stability, the US re-established assistance to the development of the Kingdom through foreign and humanitarian aid. US aid to Cambodia is bilateral aid, made through different bodies and agencies such as the United States Agency for International Development (USAID), Department of State, Department of Agriculture, etc. 6

Since 1992, the US has provided approximately US$1 billion to Cambodia.7 From 2010 to 2019, health and population was the dominant sector that received the most aid, accounting for around $339 million, followed by governance and the education sector that received $217 million and $134 million respectively.8 In 2018 alone, the US government supported various sectors in Cambodia with aid that totaled $152 million.9

USAID is known as one of the most active agencies facilitating US aid to Cambodia. Its program is recognized as the first of its kind in the kingdom and has contributed to the development of Cambodia since the 1960s through humanitarian assistance and infrastructure development.10 From 1991, this program accelerated into a long-term and large-scale program to fully support Cambodia.

In 2018, various partners received US aid in Cambodia including FHI360, ARD, Save the Children Federation, RTI International, East-West Management Institute (EWMI), Winrock International and the US peace corps.11 Priority sectors that the US government has supported Cambodia include democracy and governance, health, education, child protection, environment and food security.12 The US has also contributed significantly to combatting HIV/AIDS in the last decade and the establishment of the Khmer Rouge tribunal as well.13 Since the start of its first case in 2009, the tribunal has received $16.8 million in support.14 The US  has also been involved in landmine and UXO demining in the Kingdom. According to the Council of the Development of Cambodia, between 2005 and 2018, Cambodia received approximately $135 million from the US to focus on demining.15

USAID’s programs such as Feed the Future, Nourish16 and Food for Progress aim to assist the Cambodian government in the agricultural sector in increasing productivity.17 In 2018, the US supported approximately $8.2 million in agricultural policy and administrative management and agricultural development.18 USAID also created 190 jobs for locals by facilitating partnership between buyers and farmers in the same year.19 The US also supported the forestry sector. Projects like USAID Greening Prey Lang and Supporting Forests and Biodiversity (SFB) projects are all forestry and environment related projects.20 The SFB project was a five and a quarter year plan which ran from 2012 to 2018. The project was initiated by USAID and supported by Winrock International in collaboration with many different bodies and organizations such as the Ministry of Environment, Ministry of Agriculture, Forestry and Fisheries, Wildlife Conservation Society (WCS) and World Wildlife Fund (WWF).21Key achievements of the project are the reduction of around 12 million tonnes of CO2 emission, training more than 13000 people in natural resource management and improved protected area enforcement.22 Another ongoing project that is related to forestry and environment is the Greening Prey Lang project. The project is believed to be worth $21 million and will tackle the issue of governance and management in Prey Lang forest.23

In terms of education, the US has contributed considerably to the development in this vital sector. $22 million was spent in 2018 to support Cambodia’s education system with most of the funds focused on primary education.24 Working collaboratively with Cambodia’s Ministry of Education, Youth, and Sport (MoEYS), USAID has launched a 5-year Early Grade Reading Program (EGR) that aims to enhance reading skills at the kindergarten level in Cambodia.25Additionally, the US provides a number of scholarships and exchange programs for Cambodian students such as the Fulbright program, Youth Southeast Asian Leaders Initiative (YSEALI), academic fellowship program, and Global Undergraduate program (UGRAD).26

On top of that, democracy and good governance is one of the US’ largest budget spending sectors in Cambodia. The US also focuses on the role of civil society to achieve this goal. In 2018, $31 million was disbursed in improving Cambodia’s governance. 27 Various programs such as the Cambodian Civil Society Strengthening (CCSS) project, implemented by the East-West Management Institute (EWMI) aim to improve accountability in Cambodia. The CCSS project is a 5-year project that cost $9 million.28 It works to strengthen civil society in the kingdom.

In the health sector, Cambodia has received an extensive amount of support from the US. They have helped Cambodia fight against HIV/AIDs, malaria, tuberculosis(TB) and many other infectious diseases.29 The total funding in the health sector in 2018 was $38 million, of which more than $20 million contributed to fight HIV/AIDs, malaria and TB.30 Recently, amid the COVID-19 outbreak, the US contributed around $11 million support package for the Cambodian government to combat the pandemic.31