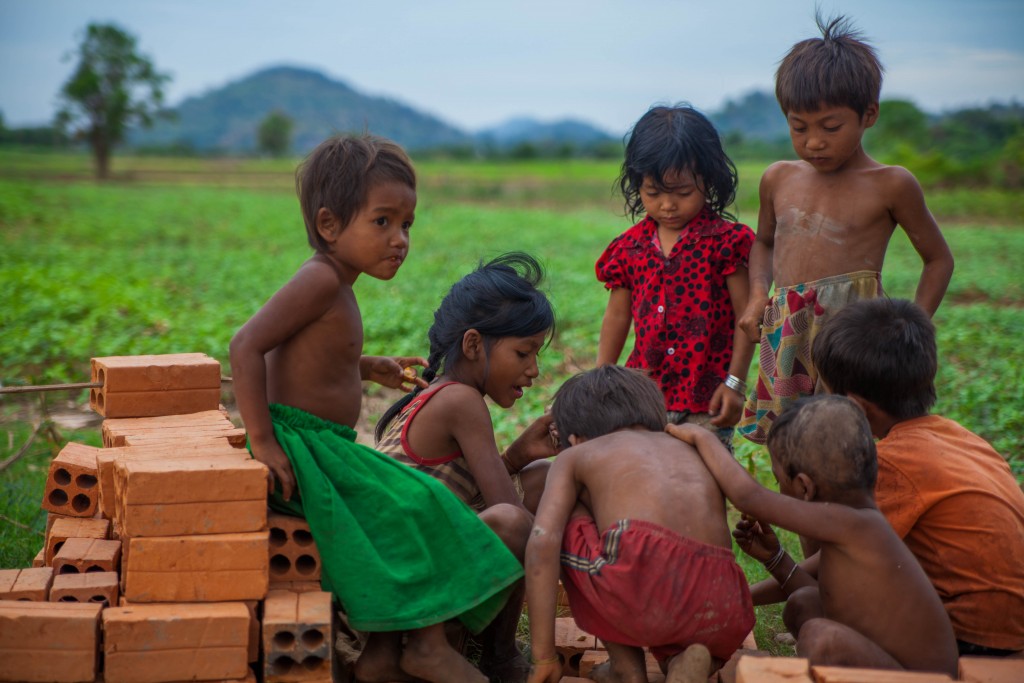 Children working with bricks, Cambodia. Photo by Sodanie Chea, take on 6 June 2013. Licensed under CC BY 2.0

Cambodia has a total population of slightly over 15 million, most of whom are under the age of 30. An estimated 250,000 people enter the job market annually.1  Despite a decade-long growth in GDP of around 7% per annum, unemployment in this country is still at the center of concerns for young people.2 How can the Royal Government of Cambodia ensure that their entrance into the labor market in such a great number keeps pace with the market’s demands?

Most of the rural work force is engaged in the agriculture sector. While nearly 22% of the population lives in urban areas, most Cambodian people (around 78%) live in rural areas.3

Besides the agriculture sector, development of the garment and tourism industries is perceived by the government to be a key to job creation. It is projected that by 2018, these sectors will employ nearly 1.4 million young Cambodians.4  The garment and textile industry alone already employs between 650,000 and 700,000 people in 2014 and 2015.5

National Strategic Development Plan 2014-2018 (NSDP) provides a platform and outline for the Strategic Plans for Development in Labor and Training 2014-2018. While agriculture is the main economic sector prioritized by the government, urbanization is also a focal part of the NSDP. However, the effect of the economy’s growth rate on poverty alleviation in rural areas is questionable, given that most employment opportunities exist in urban areas.

The Ministry of Education Youth and Sports (MoEYS) and the Ministry of Labor and Vocational Training (MLVT) are actively engaged in initiating, reviewing and implementing government policy and action plans in the labor sector. MoEYS prepares young Cambodians for the job market from an early age through completion of higher education through the National Action Plan on Early Childhood Development 2014-2018, and the Policy on Higher Education 2030. The MLVT is responsible for inspecting workplaces to ensure that they are compliant with safety and security standards and the labor law; preventing and solving labor disputes; and boosting job creation.

However, Cambodia’s government still faces some challenges. While workers’ safety and health may be threatened by harmful and hazardous working conditions and environments, the low minimum wage remains one of many persistent issues that needs sustainable solutions.6  As a direct consequence of overseas labor migration, human trafficking for labor stands at the front pages of local media. Finally, despite its commitment to international standards of worker rights, which may put Cambodia in a competitive position with neighboring countries for investment and exports, child labor still does exist in some industries.