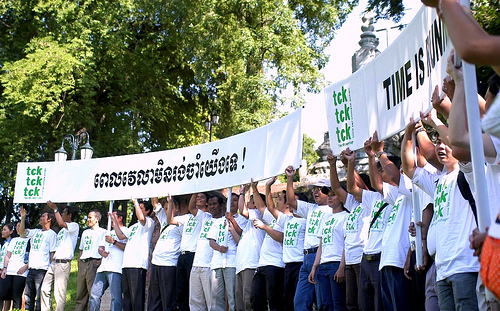 Voice from Cambodia–Time is running out. Photo by Oxfam International, taken on 21 October 2009. Licensed under CC BY-NC-ND 2.0.

Climate change is the long-term change in the statistical distribution of weather patterns. While the climate of the earth has always gone through periods of change, modern scientific evidence demonstrates that increasing and rapid weather changes are occurring worldwide. The term ‘climate change’ refers to the result of human activity related to industrialization, deforestation and changes in land use.1

Cambodia is ranked as one of the most climate-vulnerable countries, not only in Southeast Asia,2 but the world. The Climate Risk Index ranks countries most affected by climate change in the period 1996–2015 based on extreme weather events. Cambodia ranked 13th out of 181 countries.3

Potential impacts of climate change were highlighted in an April 2018 report from the Ministry of Economy and Finance and the National Council for Sustainable Development, Modelling of Climate Change Impacts on Growth.4 The report estimated that climate change could reduce Cambodia’s GDP by 2.5 percent by 2030 and by almost 10 percent by 2050. The fall is largely the result of reduced worker productivity following temperature increases, extreme events impacting on infrastructure and loss of crops.

Two-thirds of the loss could be avoided with improved policies, investment to adapt to climate change and measures to climate-proof infrastructure where possible.

Cambodia is highly vulnerable to the impacts of climate change because the kingdom depends largely on climate-sensitive sectors including agriculture, land, water resources, forestry and fisheries.7 In a developing country with a weak adaptive capacity and limited infrastructure, rural households, especially women and other vulnerable groups, will struggle to cope with the impacts of climate change.8

Cambodia lost $1.5 billion – 10 percent of its gross domestic product (GDP) – in 2015 from the negative effect of climate change, according to the Asian Development Bank (ADB). In July 2016 the Bank announced a $96 million package to help the Kingdom cope with the loss of livelihoods and income due to extreme climatic events. If nothing is done to address this problem the country could lose a bigger percentage in the future, ADB warned.9

An analysis by the United States Agency for International Development (USAID) applied climate projections for 2050 to today’s Mekong Basin economies. It found that future climate change could put up to 61% of Cambodia’s rural GDP per capita at risk.10 The 2050 climate projections would affect around 7 million Cambodians employed in the agricultural sector and about 240,000 in construction, causing a total economic impact of $1.5 billion.11

The RGC has policies and strategies in place to work towards socioeconomic, sustainable development in the climate change context. Cross-sectoral  policies relevant to climate change in Cambodia include: