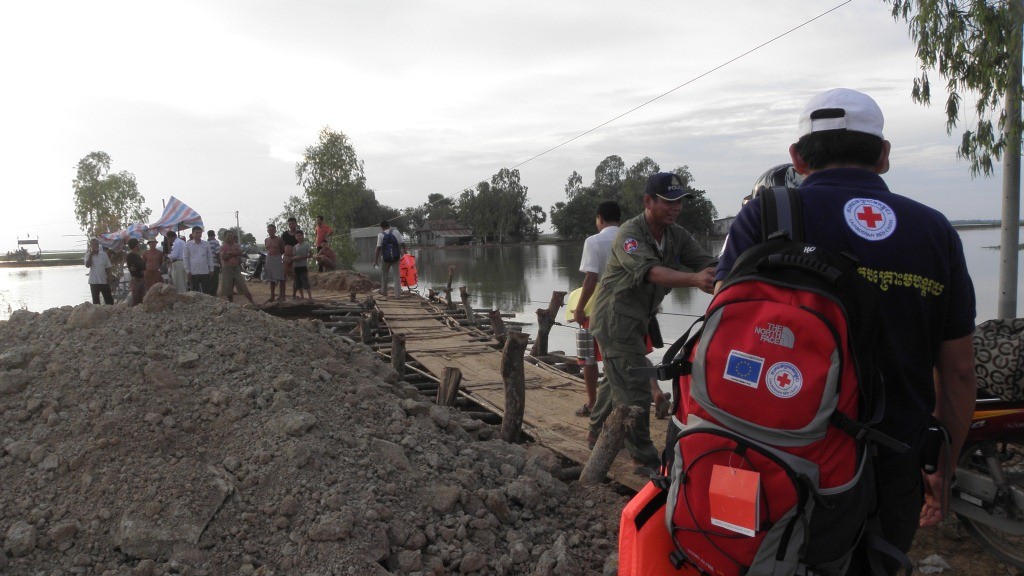 Storms, flooding and lightning strikes are the major causes of death and property damage from natural disasters in Cambodia, while drought causes severe hardship, especially for farmers. In a report in late 2015, the United Nations found that regarding the human cost of weather-related disasters, Cambodia is 7th-hardest-hit in the world per capita. For every 100,000 people, an average 8,400 are affected by disasters each year.1

In the INFORM 2018 Risk Index (which considers physical exposure and physical vulnerability, fragility of the socio-economic system and lack of resilience to cope and recover), Cambodia has a higher risk rating than Thailand, Laos or Vietnam.3

Climate change is expected to have a significant impact.4;5

The National Committee for Disaster Management (NCDM) is the key agency responsible for disaster management in Cambodia. At the national level it consists of 22 members from different ministries, Cambodian armed forces, the Civil Aviation Authority and the Cambodian Red Cross.6 It supports provincial, district and commune committees. Village Disaster Management Groups are the lowest-level bodies.

A 4-year project (2015–2019) is being carried out by Ministry of Water Resources and Meteorology  (MOWRAM) with financial help from the United Nations Development Programme (UNDP).7 Also involving the Ministry of Agriculture, Forestry and Fisheries (MAFF) and NCDM, the project is bridging  gaps in institutional capacity, inter-ministerial coordination, and infrastructure. A key element of the project is reinstalling a series of automatic weather stations to provide early warning messages.

Individual ministries also enforce their own strategies, such as the Ministry of Agriculture, Forestry and Fisheries’ Plan of Action for Disaster Risk Reduction in Agriculture 2014-2018.9

Natural disasters killed 103 people, injured 120, and affected over 2,000 families in 2017 according to statistics from the National Committee for Disaster Management.10 This is a drop from 2016, when 130 people were killed.11

Typhoons do not normally strike Cambodia at full force. However, the remnants of typhoons from China or Vietnam can still damage homes and lead to severe flooding as rivers rise. Erosion of riverbanks is a typical cause of damage to housing.

Severe floods in 2013 cost 168 lives, forced 31,000 households to leave their homes,14 and caused US$356 million in damage according to the NCDM.15 The Asian Development Bank provided a grant of $81.7 million for rebuilding nearly 400 kilometres of roads, three bridges and nine irrigation plants in six provinces.16

The 2011 floods were the worst in at least a decade, and caused more damage and death than any other natural disaster since 2000 when the Tonle Sap and Mekong rivers flooded due to higher than normal rainfall. The death toll was 247 people,17 an estimated 50,000 households were displaced, and 270,000 hectares of cultivated land was destroyed.18 It was the most expensive and widespread disaster in recorded history.

While most countries close to the equator have a higher incidence of lightning strikes,19 Cambodia’s largely rural population means there is a high level of lightning related deaths and injuries as large portions of the population are outdoors for a higher percentage of their working day. In 2016 lightning killed 108 people, injured 105, damaged nine houses and killed 80 cattle.20 The pattern of lower deaths in 2017 applies here too: lightning killed 80 people and injured 63 in 2017.21

Flooding can come just months after drought (the delayed onset or early end to seasonal rainfall). In 2002, for example, a drought that affected millions of people was followed by flooding that caused difficulty for equally large numbers. However, a dry spell of even 20 days during the rainy season itself (May–November) can also cause severe crop damage. Drought is a serious risk partly because of the lack of irrigation facilities, with approximately just 20% irrigation coverage.22 Historically forest fires have not been of significant concern in Cambodia, however, anticipated periods of long and more intense drought, associated with climate change, are expected to increase Cambodia’s risks for forest fires.23

Climate change may also increase the country’s susceptibility to outbreaks of water-borne diseases and pandemics, such as malaria and dengue.24 In the past, Cambodia has dealt with global pandemics well, including recent outbreaks of H5N1 influenza, by banning imports from neighboring countries.25 This effectiveness may be due to the high levels of health development programs and funding, and the strong presence of agencies such as the World Health Organization (WHO).26