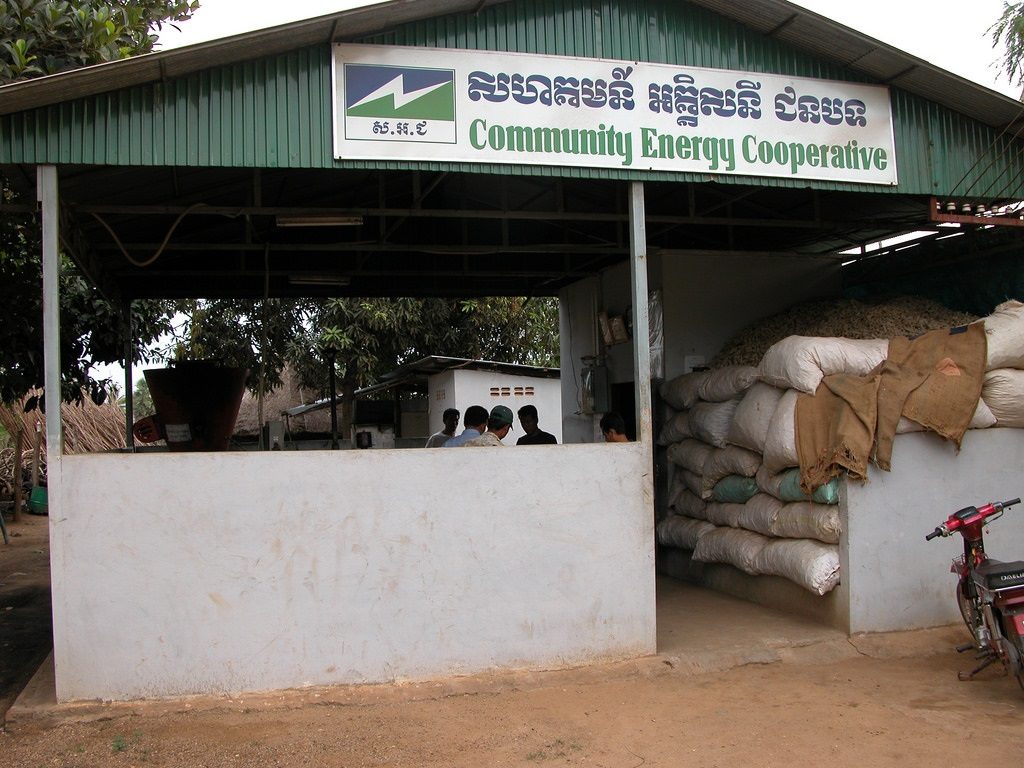 The electricity distributed in Cambodia is partly generated within the country and partly imported. For many years, local generation was on a relatively small scale, and was mostly from diesel and oil generators, while imported electricity from neighboring countries accounted for most of the supply. There was little distribution outside the main urban areas. All of these features are now changing quickly. Cambodia is generating much more of its own electricity, from hydroelectric dams and coal-fired power plants.

Cambodia’s capital, Phnom Penh, consumes 90 percent of the country’s electricity. Distribution to rural areas is rapidly increasing, however. In 2010, 29 percent of villages were connected; by mid-2015 this had more than doubled, to 62 percent, according to Ministry of Mines and Energy figures.1 All villages are expected to be connected by 2020, but around 820,000 households, or 4 million people, are still not expected to be grid-connected until 2030, at the earliest.2

Electricity demands had been forecast to grow at 17.9 percent annually from 2012 to 2020,3 driven by increasing industrial production, a growing population and rising standards of living. In fact, the actual growth has turned out to be higher, at around 20 percent per year, and may be accelerating.4

Electricity is expensive compared to many Asian countries. In some places, discounts have had to be negotiated to attract foreign investment in manufacturing. In the Phnom Penh Special Economic Zone, for example, a rate of 29 cents per kWh was reportedly reduced to 21 cents and then 18 cents.5

In Cambodia, electricity is generated by:

Electricity is generated mostly through hydropower plants and a coal-fired thermal plant at Sihanoukville, with less than four percent from diesel/heavy fuel oil plants.

There is limited growth of other forms of generation, although a 2016 study found that distributed solar photovoltaic generation is currently competitive with new diesel generators in Cambodia, even with diesel prices at their lowest in years.10

The Rural Electrification Fund was established in 2004 to help provide equitable access to electricity. It provides grant assistance for the development of solar home systems, and micro and mini hydropower generation systems.

The Vietnamese electricity is carried through high voltage lines to Phnom Penh; that from Thailand is goes through Banteay Meanchey, Battambang and Siem Reap lines. The import from Laos supplies the Steung Treng area.

Large projects expanding the distribution network are underway to meet the NSDP targets of adding more than 12,800 km of transmission lines to the network by 2018.12

There are two reasons behind the need for new transmission lines: reaching villages yet to be connected to the grid, and connecting new generators to the electricity users. For example, a $92 million line is being constructed to connect the Lower Sesan II hydro dam in Stung Treng with Kampong Cham and Kratie provinces.13

While distribution has been growing quickly, it is an expensive process. Electricité du Cambodge Chairman Ty Norin has been quoted as saying that the complete electrification of Cambodia would cost close to $1 billion.14

Distribution projects typically require external funding support. Some are carried out as joint ventures. For example, a $23.9 million development that brought grid power to 31,000 households (150,000 people) across Takeo, Kampot and Kampong Speu provinces in 2015 was a joint venture. Germany’s development bank Kfw contributed $22.2 million and the Cambodian government, through Electricité du Cambodge, paid the balance.15

Others operate on a build-operate-transfer (BOT) model, where an external company builds and operates the facility which is only transferred to Cambodian ownership after many years. This model applies to most of Cambodia’s hydro dams, but is also used for distribution. A 230kV transmission line between Kratie and Kampong Cham is being developed on a 25-year BOT basis, for example.16

The government’s core policy documents, the Rectangular Strategy 2013 and the National Strategic Development Plan 2014–18 set out priorities around expanding electricity production and all levels of the transmission network to strengthen energy security and ensure reliable and affordable electricity supply and distribution for development.

In preparations for the 2015 Paris Climate Change Conference, Cambodia committed to reducing the carbon intensity of its energy sector as part of its Intended Nationally Determined Contribution (INDC). Cambodia proposed (conditional on international support) mitigating greenhouse gases, including a 16 percent reduction by 2030 on business as usual in its energy sector.

The INDC referred to priorities that included:

The Electricity Authority of Cambodia is the power sector regulator, and is responsible for granting licenses, approving and enforcing performance standards, and determining tariffs, rates and charges for electricity. The Authority grants licenses for generation, transmission, distribution, retail, or a combined license. Its website provides extensive information on the Cambodian electricity sector, including copies of electricity licenses, the legal framework, service standards, annual reports and maps.

The Ministry of Mines and Energy (MME) is responsible for the overall administration of the energy sector. It develops policies and strategies, power development plans, conducts electricity trade with neighboring countries, and oversees major investment projects and management of the rural electrification sector. Along with the Ministry of Economy and Finance, MME is the joint owner of Electricité du Cambodge.

Electricité du Cambodge (EDC) is a state-owned company with the responsibility for generating, transmitting and distributing electricity throughout Cambodia. Its main functions are supplying electricity, developing the transmission grid and facilitating import and export of electricity to and from neighbouring countries.

The main legislation in the area is the Electricity Law 2001. This law: