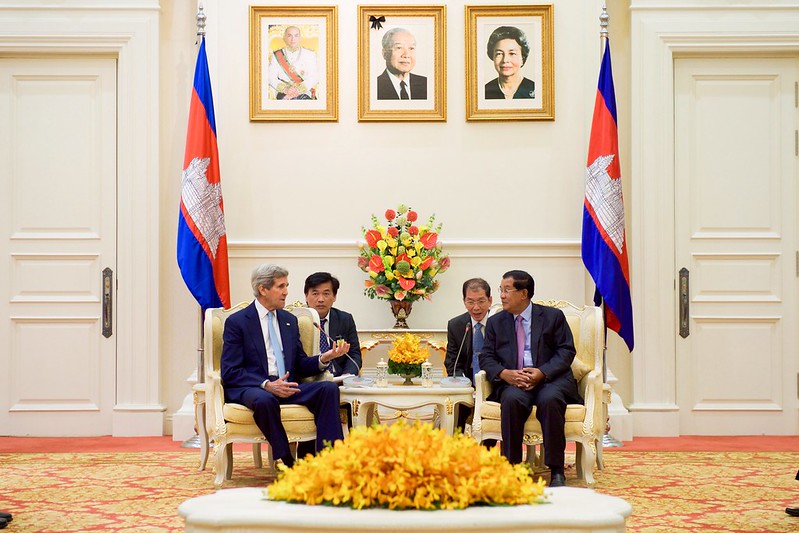 Cambodia is a lower middle-income country with a fast-growing economy that has sustained a growth rate of around 7 percent since 2011.1 According to an Asian Development Bank report, the economy contracted by 3.1 percent in 2020 due to the Covid-19 pandemic. The economy was forecast to grow 4.0 percent in 2021 and 5.5 percent in 2022 due to the quick response by the Government to the crisis and the economic recovery in Cambodia’s major trading partners, boosting demand for exports. Though not all sectors will equally benefit, it will help overall household incomes to grow.2

Cambodia’s major trading partners are ASEAN countries, China and the U.S., with the E.U. also playing an important role. The trading volume from 2019 to 2020 grew from $34.9 billion to $35.8 billion, making an increase of 2.5 percent despite flight and border restrictions amid the pandemic, according to a Ministry of Commerce (MoC) report from 2020.3

MoC’s 2020 annual report shows that trade between Cambodia and ASEAN member states has the highest volume, recorded at $11.3 billion in 2020. This was a huge increase of 22.4 percent compared with the figures recorded in 2019, with Thailand and Vietnam as the largest slices of the trade pie. The trade in 2020 with Thailand was valued at $3.4 billion while the trade with Vietnam was $3 billion, which fell by 6.4 and 1.13 percent compared to 2019 respectively.4 The Minister of the Ministry of Commerce, Pan Soraksak, held a videoconference with Gan Kim Yong, Singapore's Trade and Industry Minister, about their commitment to cooperate closely in terms of trade and investment and the progress in ratifying the Regional Comprehensive Economic Partnership5, a free trade agreement (FTA) between the ASEAN members and its six FTA partners including China, South Korea,  Japan, India, Australia and New Zealand.6

ASEAN countries have signed several agreements to allow member states to enjoy the free flow of goods, services, investment, capital and labor through the creation of a single market and production base. The agreements include the ASEAN Trade in Goods Agreement, ASEAN Framework Agreement on Services, ASEAN Comprehensive Investment Agreement, ASEAN Agreements on the Movement of Natural Persons and ASEAN Mutual Recognition Arrangement on Services.7

The vice-president of the Cambodia Chamber of Commerce (CCC), Lim Heng, said that the trade with Vietnam and Thailand in particular had been fairly consistent over the years. The export commodities mainly consisted of agricultural products like paddy, cassava, corn and rubber while the imports comprised foods and beverages, consumer goods and construction materials. He also added that though Cambodia was able to process a broad range of consumer goods, the capacity was still limited. The country still needs more imports, particularly from neighboring countries; therefore, international investment is encouraged to improve the processing industry and domestic production capacity.8

China is one of the major trading partners of Cambodia with a trading volume of $8.1 billion in 2020 (though this was a drop from $8.5 billion in 2019).9 The bilateral trade between the two nations is very important not only in the context of the pandemic but also the regional and global economic and geopolitical competition, according to the secretary of state of the MoC, Sok Sopheak.10

The Cambodia-China Free Trade Agreement has been ratified and is expected to enter into force in 2022, and will help promote the trade volume and strengthen the relations between the two countries. The FTA is anticipated to boost the bilateral trade between the two nations to $10 billion by 2023, said Sok Sopheak.11  The CCC vice president pointed out that once the free trade agreement is implemented and the Covid-19 vaccines have taken hold around the world and in both Cambodia and China, the bilateral trade between the two countries is expected to rise, particularly attracting investors from China to Cambodia to produce and process finished products to be exported back to China.12

While the economic crisis caused by the pandemic has made international trade decline, trade relations between Cambodia and the U.S. have held up well. According to the 2020 MoC data, the total value of Cambodia’s trade with the U.S. rose from $4.7 billion in 2019 to $5.5 billion in 2020, an increase of 16.8 percent.13 Although the U.S. is not Cambodia’s major source of investment, it is the country’s largest export market – primarily in garments and footwear – accounting for $5.2 billion in 2020.14

To promote greater trade and investment, the two nations regularly meet under the 2006 Trade and Investment Framework Agreement, an agreement for them to address bilateral, regional and multilateral issues.15 On 1 June 2021, U.S. Deputy Secretary of State Wendy Sherman came to Cambodia for a meeting with Prime Minister Hun Sen. The CCC vice president stated that the visit reflected the close ties, and it would boost more bilateral trade and cooperation between the two nations.16

Cambodia and the E.U. work closely with one another under the framework E.U.-ASEAN Cooperation Agreement.17 Data from the MoC shows that bilateral trade between Cambodia and the E.U. amounted to $3.8 billion in 2020, a drop of 15.9 percent from the $4.5 billion posted in 2019. The fall was due to the partial withdrawal the E.U.'s Generalized Scheme of Preferences (GSP) (the ‘Everything But Arms (EBA)’ arrangement) and the pandemic, which caused a decline in demand and exports to the E.U. and suspension of some factories’ operations.18

Cambodia receives a lot of benefits from the E.U.'s GSP, which offers the least developed countries duty-free and quota-free access to the E.U. for all products except arms and ammunition.19 The 20 percent withdrawal of the EBA preferential trade arrangement with Cambodia in 2020, that the E.U. claimed was prompted by violation of human rights and fundamental freedoms in Cambodia, affected bilateral trade with the E.U., particularly garments, footwear, travel goods and sugar.20 Fortunately, Cambodia is eligible for tariff-free exports under the United Kingdom's (UK) GSP, so it allows Cambodia to export the 20 percent lost from the E.U. to the UK instead. The UK has a strong trade arrangement with Cambodia and grants trade privileges on exports even though it has left the E.U.21

In order to boost cooperation and trade, the E.U. and Cambodia met on 11 January 2021 to prepare a new draft of the E.U.’s Development Cooperation Strategy with Cambodia 2021–2027. This aligns with the Rectangular Strategy - Phase IV in areas such as human resource development, economic diversification, private sector and job development and sustainable and inclusive development. The meeting also discussed the new draft of the E.U.’s Multiannual Indicative Programme 2021–2027, focusing on priority areas of growth and jobs, education and skills, and good governance.22