Deforestation has been one of the most significant changes the Cambodian landscape has undergone in recent decades. Much of the loss has been dense forest – old-growth forest, mostly evergreen, largely undisturbed – which fell by more than half in just four decades, from 7.6 million hectares in 1973 to 3 million in 2014.1

Key drivers of this process have been land concessions and subsequent land conversion and large-scale illegal logging. 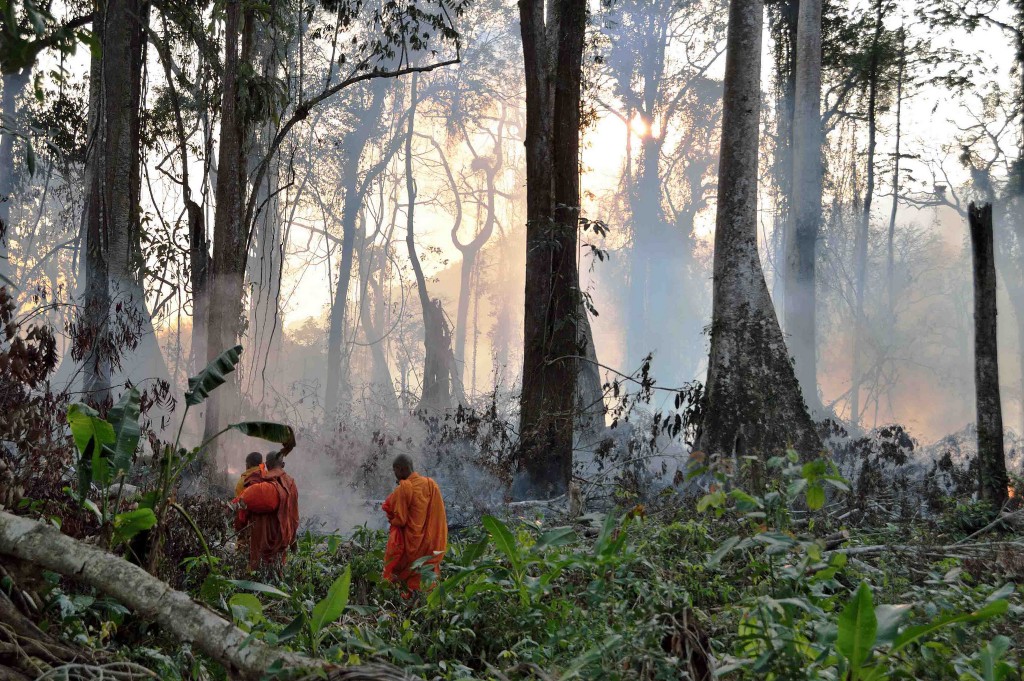 Buddhist monks walk through tropical forest set on fire to clear it for a plantation. Photo by diversityphotos, taken on March 2013. Licensed under CC BY-NC-ND 2.0.

Economic land concessions (ELCs) are long-term leases that allow the beneficiaries to clear land for industrial agriculture. ELCs have been granted for activities such as large-scale plantations, raising animals and building factories to process agricultural products. The MAFF website states that between 1996 and June 2012 MAFF signed ELC contracts covering 1,204,750 hectares. However, data from NGO Licadho (which exclude land allocated for mining exploration), shows that 2.14 million hectares have been leased to companies since the forest ‘conversion’ policy started and the government began to issue economic land concessions (ELCs) in the early 2000s.2

A member of parliament who heads the National Assembly’s finance commission has been quoted in early 2015 as saying that that by his estimates, about 70 per cent of the concessions either aimed to resell without making an investment or to strip the natural resources from the sites. He said that analysis of previous national budgets had shown that as little as $7 in tax was collected from ELCs per hectare.3

In May 2012 the government announced a freeze on issuing new economic land concessions.

It is technically illegal to grant ELCs in forested areas because forests are state public land, and ELCs can only be granted for state private land. This prohibition can be bypassed if the land is first reclassified as state private land. Areas of protected forest are also being reclassified as sustainable use zones to allow them to become ELCs, be cleared and turned into plantations.

If current trends continue, more than 2,500 square kilometers of protected areas will be converted to rubber plantations by 2020 according to a new study to be published in the September 2015 issue of the journal Global Environmental Change.

An examination of management practices showed that concessions often focused on short-term financial benefits and neglected social and environmental aspects of forest management.4

While concessions are granted for development purposes that could give greater work and financial opportunities to local people, in some cases after the trees have been cleared no development follows. Villagers not only lose access to natural resources but also get no new employment.5

Legal timber exports to Vietnam (mostly Burmese rosewood) soared between 2013 and 2015 from $45.7 million to $379 million, according to a study of Vietnamese customs data. The figures do not account for illegally smuggled timber.

The research took place in the preparation for EU talks for Vietnam to be awarded Forest Law Enforcement Governance and Trade (FLEGT) certification, which would give FLEGT-licensed timber exporters in Vietnam access to the European market. The ultimate goal of the FLEGT process is to eliminate the illegal timber trade.6 Time will tell whether and how this impacts on the flow of illegal timber from Cambodia to Vietnam.

Illegal logging occurs on a vast commercial scale in Cambodia. A 2014 report from one major international conservation group, based on government figures, suggested that a $220 million profit was made by just one company selling rosewood illegally logged in the Cardamom Mountains over just three years.7

In some cases, valid permits for clearing land such as the reservoir area for a hydro dam are used as cover for taking rare timber from a much wider area.8

There are very frequent reports of illegal logging and export of illegally logged timber involving people across all levels of society, from the wealthiest to the poorest. Government and provincial officials as well as members of the armed forces and police have been investigated or arrested on many occasions. In February 2015 the international NGO Global Witness said in a detailed report that large-scale illegal logging was conducted with official collusion.9

Logging has been carried out illegally in protected areas and wildlife sanctuaries. In some cases, even though it contravenes the law, companies are granted official or unofficial concessions within officially protected areas such as Ratanak Kiri’s Lumphat Wildlife Sanctuary.10

Violence has frequently been used against those challenging illegal logging. Forest activist Chut Wutty was shot and killed in 2012 while investigating illegal logging in the Cardamoms. Despite the risks, communities are increasingly organizing forest patrols to prevent illegal logging, according to the NGO Adhoc.11