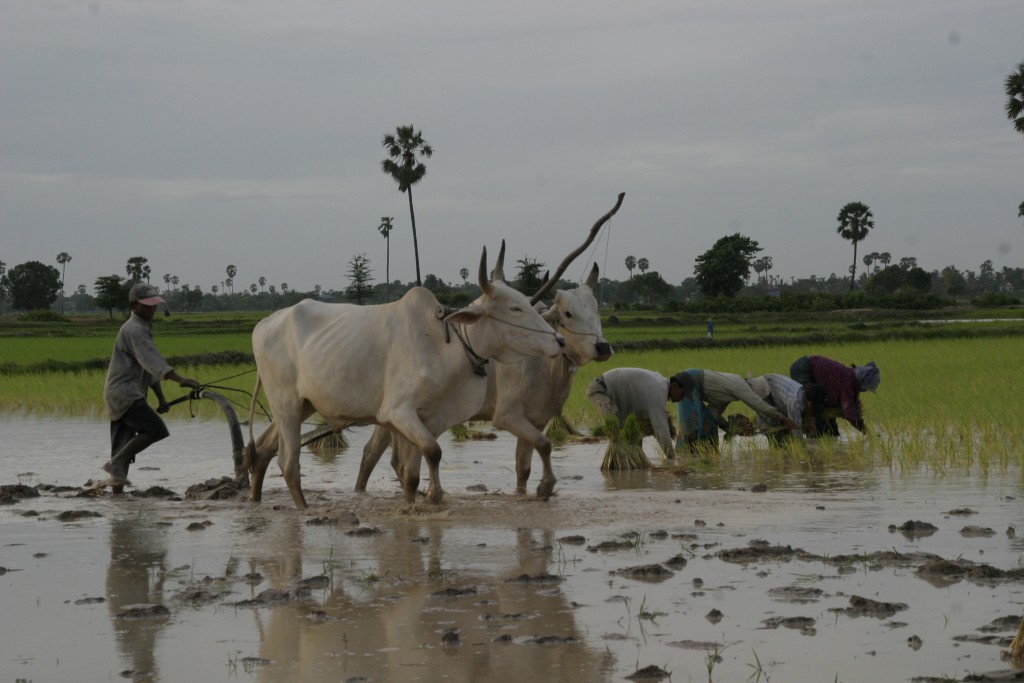 Agriculture continues to play an important role in Cambodia’s economy, but it provides a livelihood for a smaller proportion of today’s population than it did in the past. A study from the Agriculture Ministry released in June 2017 found that around 40 percent of the population work in farming, down from about 80 percent in 1993.1 Agriculture accounts for 22 percent of Cambodia’s GDP.2 Rice is by far the most important product, making up around half of agricultural GDP and using around 3.3 million hectares of land.3 Fishing and fisheries make up another cornerstone of Cambodia’s rural economy, providing an estimated 80% of animal protein in the typical Cambodian diet.4

The Ministry of Agriculture, Forestry and Fisheries (MAFF) is responsible for overseeing agriculture in Cambodia. The Cambodian government has prioritized agriculture as a key sector for development since it first released its Rectangular Strategy. Version III of the strategy aims to push agricultural investment beyond strengthening rural incomes, into improved technology, research and development, crop diversification and promotion of commercial production and agro-industries.5

This signals a transition away from small-scale family farms to industrial farming. The trend is partly enabled by government lease of large land holdings to private companies as economic land concessions (ELC). Contract farming and private land leases are other vehicles through which industrial agriculture is expanding.

The agricultural sector has been growing at a lower rate than the industrial or service sectors. Agricultural gross value added increased at 4.4 percent in 2018, reaching 21,913 billion riels (or 22 percent of GDP).6 Rice production grew by 3.5 percent, reaching 10.8 million metric tons, lower than the 5.7 percent growth rate in 2017. Exports to the European Union have been hit by new customs duties imposed at the start of 2019 to protect European producers. The decline in exports to the EU is more than offset by increasing exports to China, however.

Cambodia’s small-scale family farms tend to be rain-fed, use native seed, and can afford few inputs. The majority of farms (58 percent) produce just one crop – rice – with 26 percent producing two crops.7 On 41 percent of farms, all the produce is consumed by the household, with none sold. More than 60 percent of farmers farm on less than 1.6 hectares (4 acres); 41 percent have less than 0.81 hectares (2 acres) of land.8

Like small farmers anywhere they tend to be risk averse and highly vulnerable to flood and drought, pest and disease infestations, and other threats. They are often ill-equipped to cope with new challenges such as changing climate and increasing land pressure. Their adoption of chemical fertilizers and pesticides, typically without training, direction in Khmer language, or proper equipment, raise environmental and health concerns. Small farmers also tend to have limited access to markets.

In contrast, large-scale producers are constrained by infrastructure limitations and low levels of skilled labor. Some companies have also met conflicts with local communities, regarding land and natural resources rights.9

International investments in the sector are becoming more visible. For example, in April 2016 a $360 million Chinese-owned sugar mill was officially opened in Preah Vihear province. The plant has an annual production capacity of 360,000 tonnes of sugar, 50,000 litres of ethanol and 9 megawatts of electricity.20

There are pressures on fish numbers from environmental changes and population growth. One study cites predictions of a 40–60 percent decline in inland fishery yields for both Vietnam and Cambodia “in the foreseeable future”.22

Cambodia exports fish, prawns, crabs, and other seafood to China, Japan, Russia and some ASEAN countries. The EU has banned fish imports from Cambodia, citing Cambodia’s failure to implement and comply with international legal obligations. Examples are that Cambodia does not act against illegal fishing by non-Cambodian vessels flying the Cambodian flag,23 and also lacks a legal framework, and effective monitoring, inspection and catch certification schemes.24

The government began to reform its fisheries management system in 2001 by reducing the number of commercial lots, culminating in in 2012 with the abolition of all commercial lots on the Tonle Sap.25 The change was intended to conserve fish stocks and support subsistence fishermen. Some NGOs, however, say that illegal fishing has increased in recent years.26 The government confirms this: officials said cases of illegal fishing continued to rise in 2015, when almost 4,000 illegal fishing offenses were stopped and 181 were sent to court.27

Another challenge facing freshwater fisheries is the development of dams such as the Lower Sesan II dam. Numerous studies have cautioned that dams will have a major impact on fish migration, fish breeding and fish stocks, and that there is little prospect of mitigating these effects.28

Related to agriculture and fishing