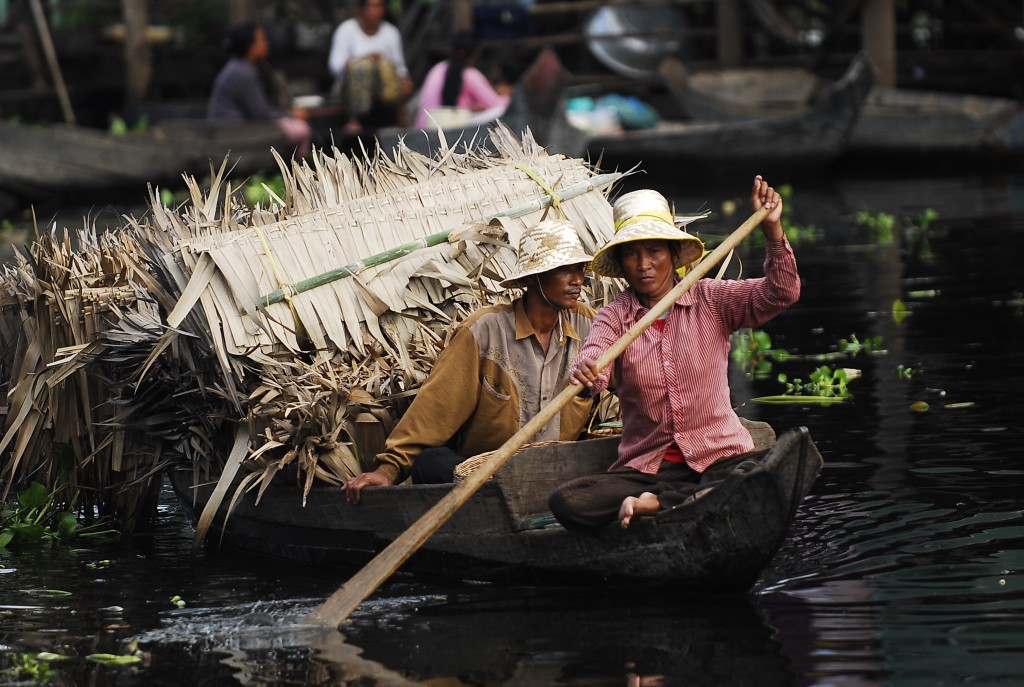 Just under two-thirds of Cambodia’s population depend on agriculture, forest products and fisheries for their livelihoods,1 so the management of the environment and natural resources is of great importance. Cambodia’s environment is also considered a resource for the world. Part of the Burma Indochina Hotspot, Cambodia is a treasure house of biodiversity. So far, around 8,260 species of plant, 874 species of fish, 500 species of bird and  more than 250 species of amphibian and reptile have been identified.2 On the Red List of the IUCN (International Union for Conservation of Nature), 264 species are listed as threatened in Cambodia.3 However, economic development has led to significant environmental changes since the 1990s.

Although Cambodia’s geography is dominated by the low-lying central plains that make up about three-quarters of the country, there are several other distinct landscapes: forested highlands (including the Cardamon, Dangrek and Chhlong mountains; flooded forest; the Tonle Sap lake and Mekong river system; the eastern plains or highlands; central forest; the coastal region that includes mangrove wetlands; and islands of the Gulf of Thailand.

With about two-thirds of Cambodia—including the Tonle Sap—sitting in the Mekong basin, it’s environment and ecosystems contribute significantly to the health of the whole Mekong region, and especially the Mekong Delta. From as early as 2001, the FAO has highlighted changes to the Tonle Sap ecosystem brought on by siltation, agro-chemicals, other pollution, changes to hydrology, irrigation and transportation, as well as the fact that these changes impact the broader Mekong system.4 This highlights some of the main challenges facing Cambodia’s environment and natural resources as the country’s economy develops. The growing and increasingly urban population, who are earning more and demanding a more modern life-style, are putting pressure on land, food resources and transportation needs.

The Ministry of Environment is responsible for implementing the Environment Law and associated regulations, in-line with the Constitution’s mandate that the state take responsibility to “protect the environment and balance of abundant natural resources”.5

The Ministry of the Environment’s Climate Change Department released its Intended Nationally Determined Contribution (INDC) policy in October 2015, which targets a 27 percent cut in greenhouse gas emissions from the projected status quo levels for 2030. In addition, it sets a target of increasing forest cover to 60 percent of total land area by 2030. Prior to the release of this policy, expenditure on climate change was set to grow to 1.5 percent of GDP by 2018.6

Care of the environment and natural resources is a focus in many strategy documents. The government’s Rectangular Strategy for Growth, Employment, Equity and Efficiency gives high priority to environmental protection. Cambodia’s Millennium Development Goals included a specific goal to “integrate principles of sustainable development into country policies and programs and reverse the loss of environmental resources.”7 The National Strategic Development Plan (NSDP) for 2014–2018 states the importance of protecting natural resources and sustainable development.8

The 1993 Royal Decree on the Protection of Natural Areas, administered by the Ministry of Environment, recognized 23 protected areas in four categories:

At the time, these covered more than 18 per cent of the country’s total land area.9

Cambodia’s Resource Governance Index ‘poor’ grade of 30 out of 100 points in 2017 placed it 79th out of 89 countries and 14th out of 15 countries in the Asia/Pacific. The score, for its early-stage gold mining, reflected poor ratings for national budgeting and licences in particular.10

The government has recognized the contribution various areas of the country’s environment and natural resources make to the economy, and development. Their National Forest Sector Policy identifies socio-economic development and poverty reduction as two of the driving factors behind its sustainable forest management activities.11 Some report, however, that despite a strong legislative framework for the environment, it is either ignored or side-stepped for short-term personal gain.12

The World Bank has estimated the total value of Cambodia’s natural resource rents as a percentage of GDP. This shows the contribution that natural resources (such as forest timber) make to the country’s economic output. This has fallen in recent decades, from a high of 8.3 percent in 1995 to 1.9 percent in 2016, as other industries such as manufacturing have grown.13

Conservation of the environment indirectly contributes to tourism income through eco-tourism programs, which made up 1.3 per cent of all tourism arrivals in 2014. In the same year, tourism contributed US$2.736 billion to the economy.14

Besides the environment’s financial value, areas of Cambodia’s natural landscape have high cultural and spiritual value to the country’s indigenous groups. For instance, the Prey Lang Community Network reports that approximately 200,000 Kuy people depend on the central forest area known as Prey Lang for their livelihoods, and their social and spiritual traditions are tied to the forest.15 Other indigenous and Khmer community groups make similar claims across the country.

Cambodia has a rich bio-diversity, including an array of diverse organisms and forest resource on which many poor people in the countryside depend for livelihood. However, in recent years the forest resource has increasingly come under pressure from economic land utilization. Meanwhile, the country is known to be vulnerable to impacts of climate change due to its low adaptation capacity. Rural populations are most at risk to destructive climatic events such flood and drought.16

Related to environment and natural resources