Articles 6 and 7 of the Environment Law 1996 require that an environmental impact assessment (EIA) be conducted for projects likely to have an impact on the environment, whether they are public or privately funded. EIAs should be examined and evaluated by the Ministry of Environment (MoE) before being submitted to the government for a decision.1 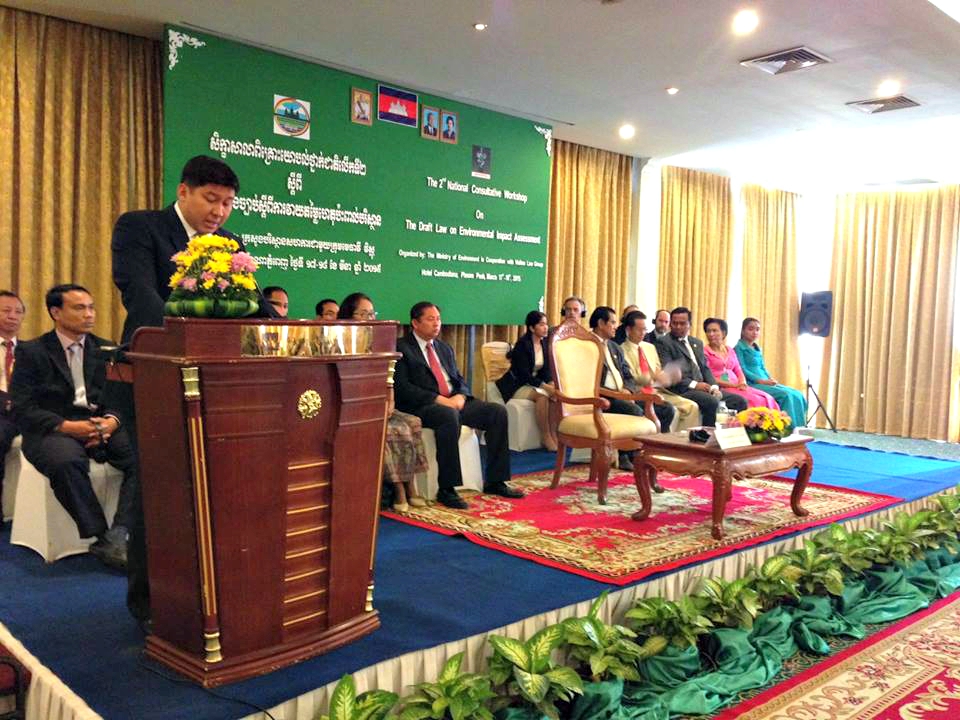 The Code is now in its 11th draft. There have been many rounds of consultation at both the national and subnational level. The new draft revises the Ministry of Environment’s authority and the overall review obligations into a more sustainable and implementable process. In the new draft, the “EIA Unit” strengthens the monitoring and reporting system and increases the accountability of the project proponents to ensure effective monitoring and reporting. An Expert Review Committee will be established, which includes officials from the Ministry, other relevant ministries and institutions, as well as independent experts.

According to Article 110 of the draft Code, a full EIA is required if the proposed project is located in areas of high conservation value or may have a negative impact on that area. These areas are, for example, mangrove forests or indigenous people’s land.6 The ministry or institution responsible for the environment shall be responsible for managing Environmental Impact Assessment.7

When the Environment and Natural Resources Code will be implemented is not known. Questions around budget remain. Once it is introduced there will be enormous training and capacity building requirements. There will also be a need to carefully link it to the government’s existing decentralization programs.

The 1999 Sub-decree on Environmental Impact Assessment Process requires that an EIA be conducted for all public or private projects involving activities that are listed in an attached annex. This includes projects for agro-industry, wood and paper production, mining, chemical plants, textiles, power plants, tourism and infrastructure, amongst others. However, the sub-decree includes an exemption for “special and crucial projects approved by the Royal Government.”8 Exceptional projects, “that are considered to be necessary or emergency projects” are also mentioned in the draft EIA law and in the 10th Draft of the Code in Article 82.9

The 1999 sub-decree places full responsibility with the MOE for monitoring projects 10 Monitoring should take place during the period of construction, operation and closure of a project.11 The Department of Monitoring and Environmental Impact Assessment is responsible for reviewing EIA reports and conducting this monitoring role.12 The institution responsible for approving a project must do so only after consideration of the MoE’s findings and recommendations.13 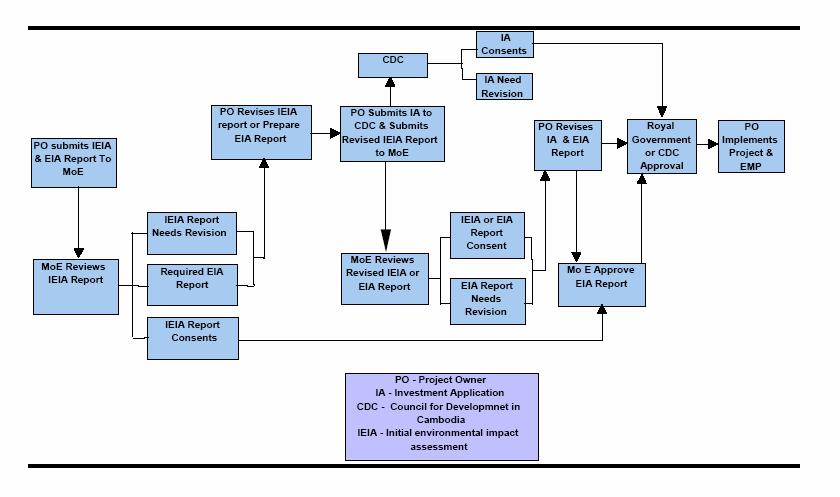 The 2009 Prakas on General Guidelines for Initial and Final Environmental Impact Assessment Reports states that the project implementer may conduct the EIA and prepare the reports or they may employ the services of a consultant firm to conduct the EIA.17 However, the report writing team or consultant firm must be qualified and recognized by the MoE.18 The project implementer must submit an application to the Ministry of Environment for a review of the initial and final EIA report.19

After reviewing an EIA report, the MoE should approve or submit comments to the project implementer with suggested revisions to the report. The project implementer should then make the necessary amendments and re-submit to the MoE.20 An annex to the Prakas provides definitions of key terms and specifies what should go into an EIA report. The annex states that the initial EIA is a study on the social, physical and biological environment in the study area, and is mainly based on existing data. The initial EIA is used to determine, predict and analyze potential environmental impacts that may be caused by project activities. The full EIA is a more detailed study, and is based on primary data gathered in and around the project site, and is again used to predict potential impacts of the project.21

The Prakas goes on to outline the required content of an EIA report, which includes:

In addition to the Environmental Law and associated regulations, a number of other sector specific laws also make clear that EIAs must be conducted for projects including mining23 and economic land concessions.24 Any projects in or adjacent to forest land must be subject to EIA,25 as must any projects that impact on protected areas.26

It has been recognised that Cambodia’s legal framework for conducting EIAs is incomplete, and a new Code that will include this is in the process of being drafted. However, there are also practical challenges in ensuring that the integrity of the EIA process is respected. As one observer states, “the need for environmental assessment in Cambodia is still widely considered as secondary to the need for development. The significance of EIAs is not fully recognized by, for example, many of the government ministries responsible for infrastructure or industrial and agricultural development.”27

EIAs are becoming more common, however, and the MoE is increasingly sharing draft EIA reports for major projects with civil society groups and requesting their comments. For example, EIA reports for the Kamchay Hydropower Dam (Sinohydro Corporation), Lower Sesan 2 Hydropower Dam (Electricity of Vietnam), and the offshore Block F oil exploration area (China National Offshore Oil Corporation) have all been released for comment in recent years. In addition to developing an improved legal framework, since 2010 the MoE has received technical support from the Chinese Appraisal Center for Environment and Engineering, which operates under China’s Ministry of Environmental Protection.29