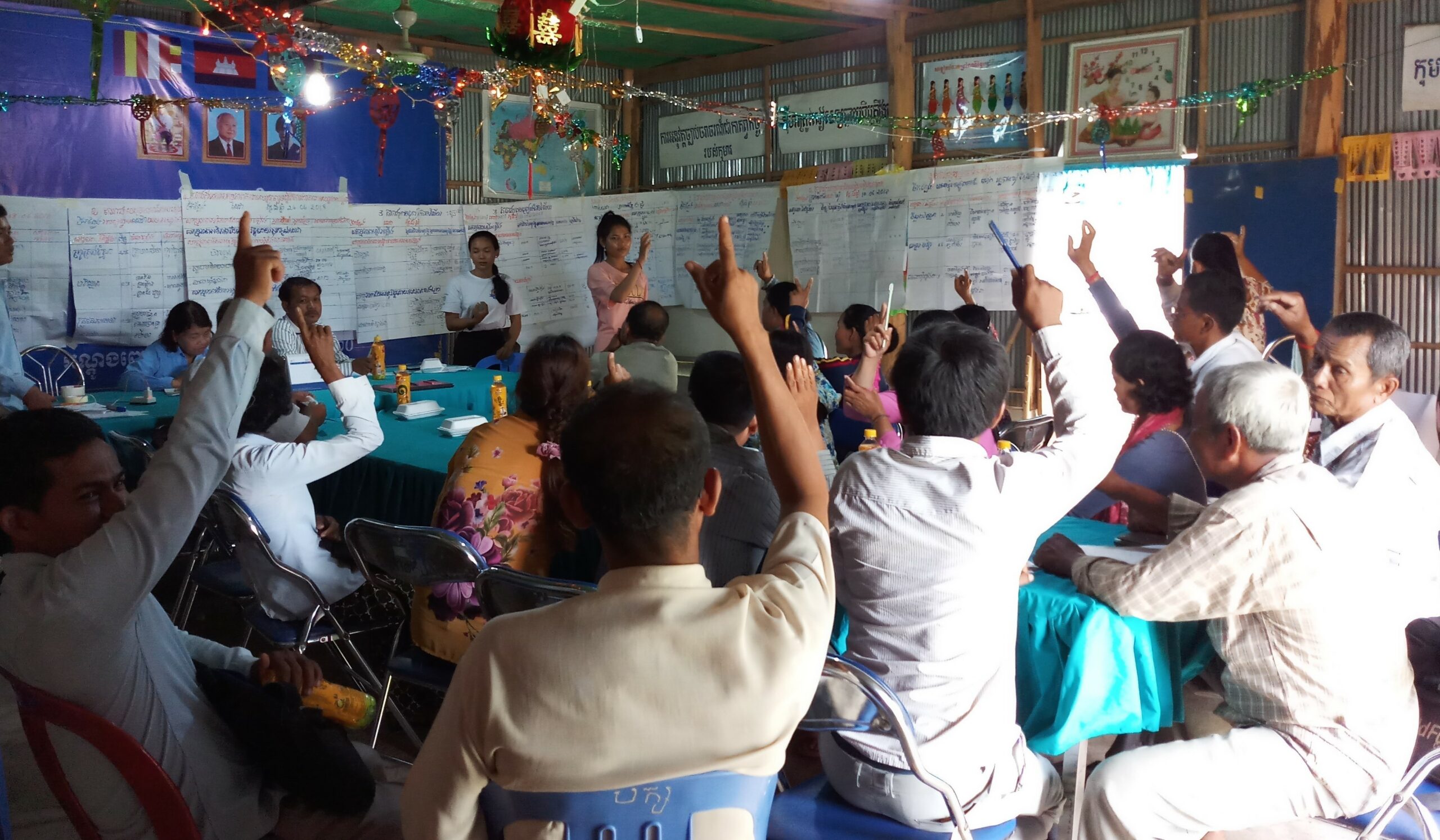 The budget of khan/municipality and commune/sangkat administrations is included under the budget of the municipality they belong to. These budgets are based on the allocation and transfer of sangkat/commune funds, and the revenue collected by the khan/municipality and sangkat/commune administrations. They are based on the objectives of policies, programs, sub-programs and priorities, and a cluster of activities that describe the objectives and targeted indicators, timeframe and funding needed.

Article 146 of the Cambodian Constitution provides the legal basis of sub-national administrations, with the provision for the adoption of an Organic Law, which still remains to be completed.1 The Organic Law is expected to delineate more clearly the roles and relationships of the provinces, districts and communes, to differentiate between rural and urban governance structures and to provide a legal basis for the allocation of functions and revenue to sub-national units. Several other important issues still need to be addressed adequately: the improvement of transparency and accountability within local administrative mechanisms, the human resources of local administrations, commune revenue collection capacities and popular participation in local decision making, as well as in local development.

The 2008 Organic Law provides the core administrative basis for deconcentration and decentralization reforms.4 The Organic Law affirms the power of the sub-national administrations in line with the Constitution and in keeping with the principles of a democratic unified administration in a unified state. All defined sub-national administrations are legal entities and have legally elected councils. Entities promote democracy through public representation, local autonomy, citizen consultation and participation, responsiveness and accountability, promotion of quality of life, equity, integrity and transparency, and anticorruption practices.

Based on Article 35 of the Law on Financial Regime and Property Management for Sub-National Administrations, the calendar for the draft Law on Annual Financial Management is divided into three stages.5

Simultaneously, the Royal Government of Cambodia (RGC) issues a circular on the national budget strategic plan and a circular on the sub-national budget strategic plan in order to provide new principles and key technical guidelines for updating the strategic budget plan. The strategic budget plan is a three-year rolling plan developed yearly by the municipal/provincial administrations following a bottom-up approach. The five-year development plan is organized every five years and a three-year investment program is updated annually.

Starting from a very low base in 2012 and with initial years of slow implementation, districts and municipalities have grown quite rapidly during this period, at 40.2% nominal and 33.4% real per year, respectively, although per capita funding remains quite low. As a proportion of gross domestic product (GDP), total expenditures of all sub-national administrations increased from 1.0% of GDP in 2008 to 1.6% of GDP in 2016.8.

Communes did not have a development budget before the decentralization reforms. Since then, modest budgets have provided communes with the opportunity to undertake decision-making processes and prove that they can manage small projects. Councils must prepare and adopt budgets annually in line with the national budget calendar. According to Section 7 of The Law on Commune and Sangkat Administrative Management, budgets must balance with no deficits, debts, or financial obligations. Budgets should reflect priorities as set out in plans and investment programs. Procedures for preparing and adopting budgets are set out in a sub decree. Recent comment suggests that there is room for improvement in the local budgeting process.10

The Law on Commune and Sangkat Administrative Management (2001)11 establishes that the commune council is required to prepare a five year development plan and three year investment plan. The law contain the technical guidelines to prepare and implement the commune/sangkat development plans with efficiency, transparency, accountability and the full participation of citizens and stakeholders, with regard to current issues, social equity and climate change.

The process of development planning at the commune/sangkat level consists of two major tasks. Firstly, developing the complete five-year Commune Development Plan (CDP), and secondly, reviewing and updating the annual Commune Investment Plan (CIP). In the CDP preparation process, commune/sangkat councils (CC) consider strategies for physical infrastructure and non-infrastructure that are meant to address the needs of citizens.

The planning process of CCs marks a certain level of participation from citizens and partnership between stakeholders.12 The district integration workshop shows the importance of the participation of NGOs, line departments, and CCs in sharing information to respond to the commune priorities. CCs can also make a request and call for external support to their area. 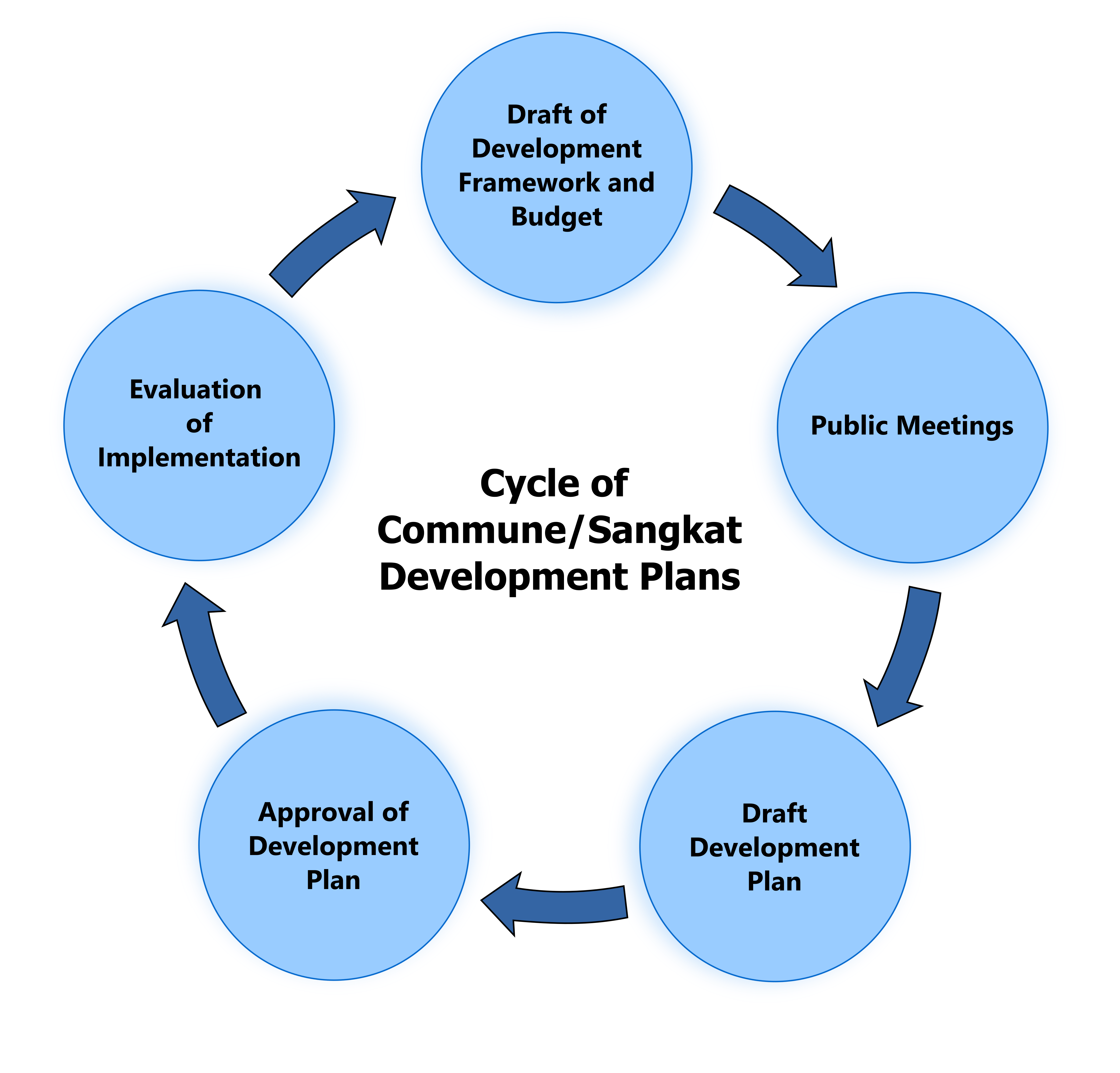 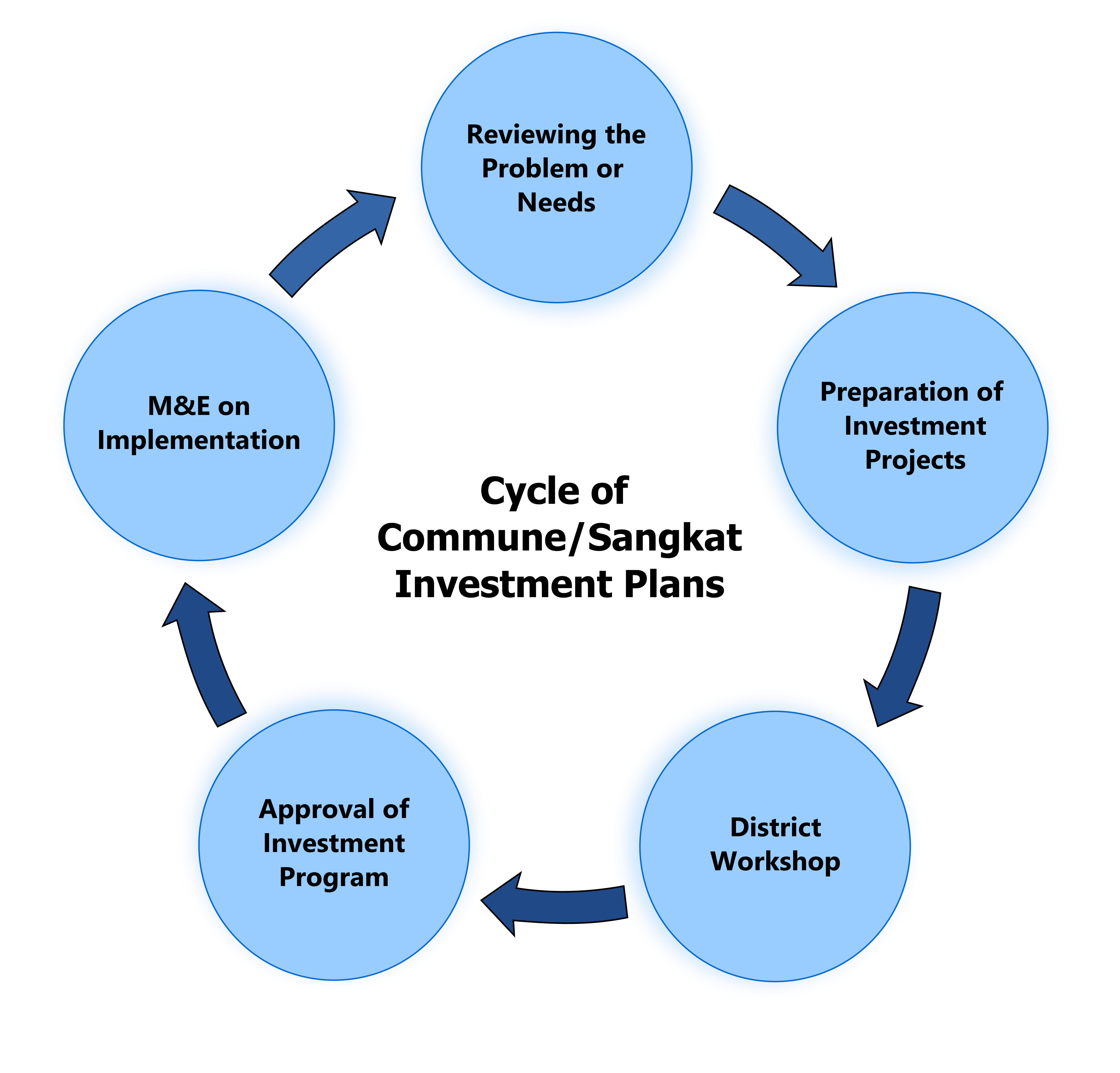 Every year, communes have three key decisions to make in relation to their development budgets. The first is to review and update their five-year development plans to make sure these are aligned with their priorities. The updated list of priority activities is submitted at the district integration workshop (DIW), which provides a forum for non-governmental organizations (NGOs) and line departments to address commune priorities by making provisional commitments. After the DIW, commune councils approve the final decision on the use of their own development funds for the year, taking into consideration the recommendations of the planning and budgeting committee.

The second key decision refers to the project implementation phase itself. Communes must select an appropriate implementing agent or contractor to carry out the investment. This decision is governed by procurement regulations which stipulate that it must be done through a bidding process facilitated by provincial officials.

Finally, every year, communes must authorize payment to the contractor once each phase of implementation is completed. This is a crucial step in the monitoring process as the council must ensure the quality of the project, and, where it doesn’t meet the quality standards, the council should work with the contractor to help them achieve what is required.