Khmer people make up 90% of the Cambodian population, followed by Vietnamese (5%), with the balance being Chinese, Cham (mostly a muslim people) and indigenous ethnic groups sometimes called Khmer Loeu. 1

The 1998 Cambodian population census identified 17 different indigenous peoples, but the consensus today is that there are 24 groups spread across 15 provinces, with the highest populations by far in Ratanakiri, Mondulkiri and Kratie. They are estimated to number around 200,000 or around 1.2% of the population.2 Groups are often identified by their language. There are at least 19 indigenous languages in Cambodia.3 They broadly fall into two linguistic families: Austronesian, which includes the Jarai people, and Mon-Khmer, which includes the Brao, Kreung, Tumpoun, Bunong and Kui. 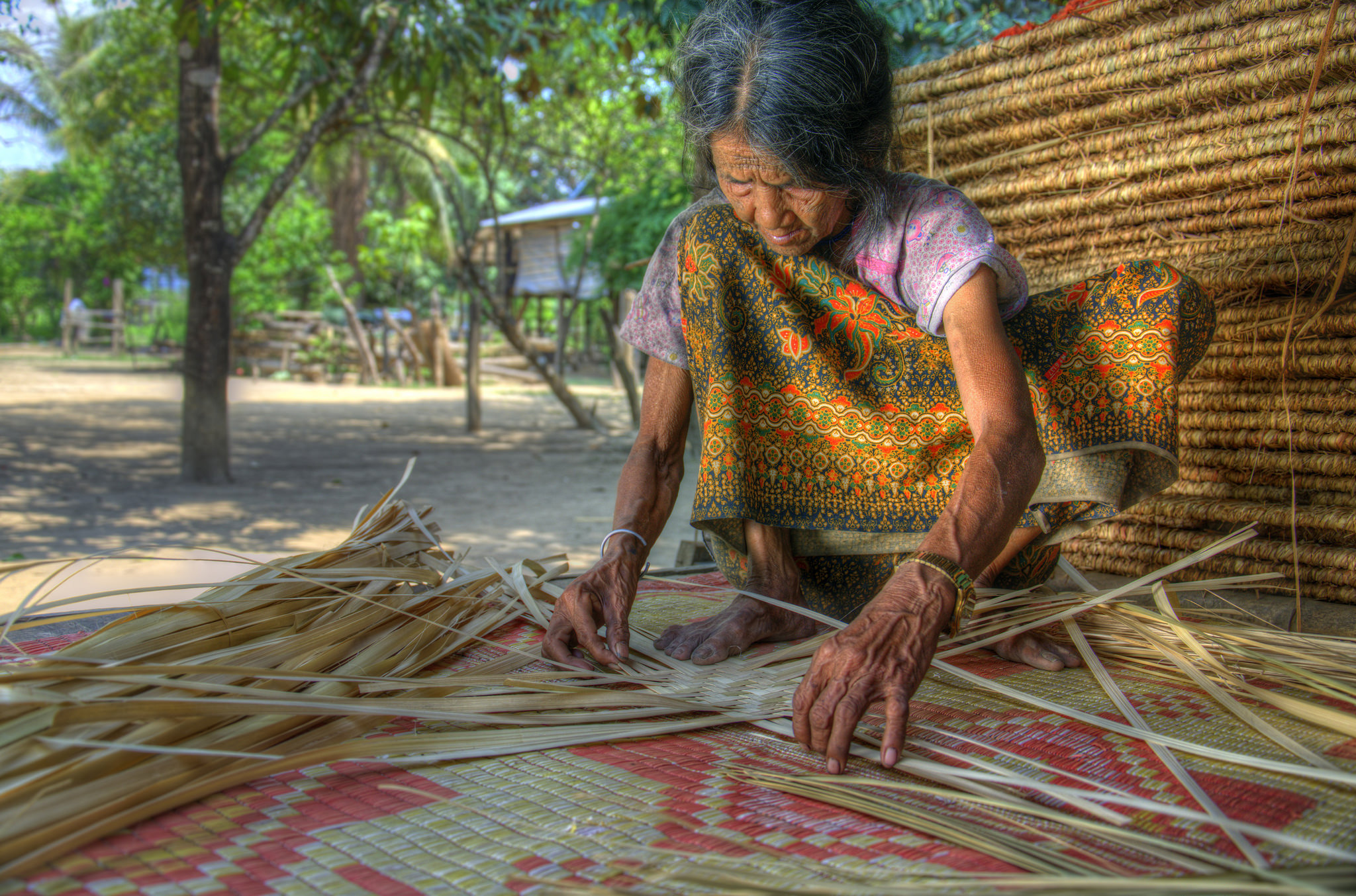 Ethnic Broa woman weaving a mat out of palm fronds in Ratanakiri, Northeast Cambodia. Photo by Ethan Crowley, taken on 01 May 2012. Licensed under  CC BY-NC-SA 2.0

They have traditionally managed nearly 4 million hectares of remote evergreen and dry deciduous forests.4 The long-term wellbeing of indigenous cultures is strongly linked to their land use systems and access to forest resources. They practice rotational (shifting) cultivation and animal husbandry, and in forests harvest rattan and vine, resin, cardamom, and honey. Weaving is another key source of income. Some income sources depend on location, such as zircon gemstone mining outside Banlung in Ratanakiri.

NGO Forum on Cambodia has reported that economic land concessions, mining concessions and hydropower dams, land grabbing, deforestation and illegal logging have severely impacted on the livelihoods of indigenous groups.5

In one example, 17 indigenous communities of mainly Tumpuan, Jarai, Kachok and Kreung peoples in Ratanakiri said their lands had been grabbed for economic land concessions (ELCs) by a rubber company based in Vietnam, with a finance connected to the World Bank’s International Finance Corporation (IFC). With the assistance of NGOs and indigenous people organizations, in 2013–2014 these communities went to the IFC’s Compliance Advisor Ombudsman (CAO). In September 2015, the ombudsman facilitated negotiations between the parties, resulting in the rubber company agreeing to facilitate the communal land title processes for 11 of the affected communities, and provide other remedies.6

United Nations Special Rapporteur Erica Irene Daes noted: “The gradual deterioration of indigenous societies can be traced to the non-recognition of the profound relationship that indigenous peoples have to their lands, territories and resources.”7

The Ministry for Rural Development has a National Policy on the Development of Indigenous Peoples (NPDIP), approved in 2009.8 The NPDIP aims to promote the livelihoods of indigenous peoples and to improve their quality of life. It concentrates on ten development sectors including culture, education and vocational training, health, environment, land, agriculture and water resources, infrastructure, justice, tourism, and industry, mines and energy.

The 2001 Land Law makes crucial provision for communal land titles in articles 23–28. Article 25 provides for collective ownership of land, while Article 26 recognizes the role of traditional authorities, mechanisms and customs in decision-making and exercising ownership rights. Under Article 28, no authority outside the community may acquire any rights to immovable properties belonging to an indigenous community.

A sub-decree on Procedures of Registration of Land of Indigenous Communities was approved in June 2009, but progress has been slow because of the complexity of the process:

While the Land Law gives strong protection on paper for indigenous communities, many observers have said that the lack of implementation and enforcement has left indigenous peoples vulnerable to commercial and state interests, which are increasingly attracted to exploiting the economic potential of the forests and upland areas traditionally used and managed by indigenous communities.9

As of June 2018, only 24 indigenous communities had received communal land titles under the Land Law10 (Profiles: Indigenous Communities). There seemed to be no change by May 2019, when a statement from the Ministry of Land Management, Urban Planning and Construction said the Ministry had registered communal land for 24 indigenous communities, equal to 648 land parcels.11 However, the same statement said that the Ministry has set 2021 as the deadline to complete land registration nationwide, including indigenous land registration.

There are approximately 455 indigenous communities in Cambodia. The title is worth having – in 2015 a Bunong community in Mondulkiri successfully used its title to defend its land in court.12

For major infrastructure projects (such as the construction of the Lower Sesan 2 dam), indigenous communities are often required to relocate.

The 2002 Forest Law addresses customary user rights of forest products and by-products for local communities13 and provides a legal basis for rural communities, including indigenous communities, to use and help manage forests through community forestry. While the Forest Law provides a legal basis for community forests, the 2003 Sub-decree on Community Forest Management set out rules for the establishment, management and use of these forests in Cambodia.

The ODC dataset for community forests lists 337 different forests. There is a vast range of sizes, with a handful being less than 10 hectares and one over 5000 hectares.

The Cambodian Constitution guarantees all citizens the same rights “regardless of race, colour, sex, language, and religious belief.”

Cambodia voted in favour of the United Nations Declaration on the Rights of Indigenous People in the UN’s General Assembly in 2007. It has yet to ratify ILO Convention No. 169 on Indigenous and Tribal Peoples, however.